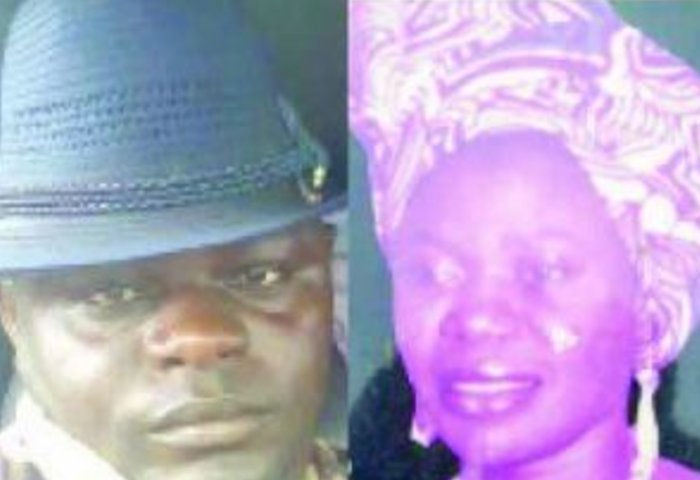 Wife seduces husband’s friend: When Danladi Funtuwa, 38, an auto mechanic from Nasarawa Eggon area of Nasarawa State, working in ‘mechanic village’ on Bukan Sidi in Lafia, and his wife, Salamatu Maka, 31, a seamstress from Wamba Local Government Area of the state, met in 2013 in Lafia, during an empowerment programme of Governor Tanko Almakura, it was like love at first sight. That love turned a remarkable corner when in March 2014, they got married and began to live as husband and wife in Shabu, Lafia.

But some four years down the line, the love made in heaven has become shattered on earth, no thanks to fertility challenges.

What God has joined let no man put asunder, the Old Book says. But it is most painful when the man used in putting asunder that union is your bosom friend. This is the truth that hit home as our correspondent sat through a session in which Salamatu told a stunning tale of how she was impregnated by her husband’s best friend, Mr. Francis Kulungu, 35, an indigene of Awe Local Government Area of the state and a land and property agent in Lafia.

The bubble burst when Mr. Funtuwa, in anguish, reported to the Chief of Shabu, Alhaji Sulieman Abdullahi, the three-month pregnancy his wife was carrying for his best friend. In an interview with Saturday Sun, he talked about how he started suspecting his friend’s affair with his wife when he started frequenting his house, on the pretext of paying a friendly visit, even when he (Funtuwa) was not around.

“Owing to the nature of my work as a mechanic, I close very late, but each time I got home after that I would meet him sitting outside and waiting for me or I would be told he had just left,” Funtuwa told our correspondent.

“Some of my neighbours who suspected something fishy between them complained to me about the man’s closeness to my wife and wondered aloud what the kind of friend he is, saying he was always visiting and chatting with my wife in her shop.”

Having been alerted, Funtuwa decided to keep a close but surreptitious watch on the two. But over a four-month period, his trap caught nothing tangible he could use to openly confront them over their evil deed. Didn’t a proverb say that as you monitor the moves of an animal trapped inside a hole so does it from there monitor your moves too? So it was with the two lovebirds engaged in an illicit affair and Funtuwa.

When his efforts seemed to have drawn a blank, he hit on a seemingly foolproof idea, which he felt he could use to nail them once and for all. On May 14, 2017, he lied to his wife that he was going to Kaduna to buy a Peugeot 406 engine for one of his customers’ car and that the trip would keep him away for three days.

But rather than travel as he had made her believe, he stayed in a neighbour’s house hoping to monitor his wife’s movements from there. The following day, he returned to the house at about 12:30pm in the middle of the night only to discover to his dismay that his wife was nowhere to be found. Further move to know her whereabouts was thwarted by his discovery that her phone was permanently switched off for the two days duration.

Unknown to him, his wife and his friend, Kulungu, had left Lafia, the same day, for a visit to his (Kulungu’s) younger brother, schooling at the College of Education, Akwanga, and spent two days there. At the end, the wife returned only to meet an enraged husband waiting for her at home.

“That was the beginning of the problem,” Funtuwa icily observed. “I demanded to know where she went. She was too tongue-tied to talk.

From that time till now, we’ve not had sex because she was unwilling to tell me where she went. I reported the matter to her parents and they supported me to insist on knowing where she went.”

For a long time, she continued to remain taciturn. On Sunday, July 30, 2017 matters took a turn for the worse as the enraged husband changed tactics, drew a cutlass and threatened to kill her right in their bedroom if she refused to open up.

“At 11pm, when I could no longer hold my anger, I drew a cutlass I bought last year to protect myself in case of an attack and asked her to say her last prayers as I was going to kill her.

She started pleading for her life. But all her pleas fell on deaf ears as I told her firmly that I would only spare her life if and only if she told me the truth and nothing but the truth about her two days trip without my knowledge and about her relationship with my friend (Kulungu).”

Having been so cornered with no way of escape, Salamatu opened up and began to sing. She told him all she knew about the affair that she said started with Kulungu in April. She confessed that she was actually the one who seduced him into the secret love affair and she did that to know whether her inability to conceive for the past three years they’d been married is hers or husband’s.

On the mystery surrounding the two days trip away from her matrimonial home, she revealed that Kulungu took her to his younger brother’s apartment in Akwanga where they had fun for two days. Crying profusely, she earnestly pleaded for forgiveness, adding that her desire to have a child led her into trying another man to know where the problem is and that’s why she couldn’t use condom. In fact, at the end of the confession, she confirmed to him that she was actually three months pregnant courtesy of Kulungu.

In an exclusive interview with Saturday Sun, Salamatu confirmed her husband’s story and hinged her reason for going into the secret love affair with her husband’s friend on her impassioned desire to have a baby after marriage. She regretted her husband’s inability to bring that about more than three years after their wedding.

Her account: “A year after our marriage, we went to Dalhatu Specialist Hospital, Lafia, to carry out some tests to know why I have not conceived. The tests showed that my husband has low and watery sperm count and as a result might not be able to impregnate a woman except something was done about it.

“The hospital treated and certified him fit after six months. Yet, there was no pregnancy. We went back to the hospital and the result certified both of us fit and fertile, yet nothing happened. In March 2017, our marriage was exactly three years old without a child. All my mates in marriage have two children each. I was tired of answering questions from colleagues and friends.

“Kulungu, my husband’s friend, is a regular caller at the house and we became friends. When I narrated this problem to him, he showed much concern about it and suggested fertility test for both of us. We did it last year, around May, at the specialist hospital and the result showed that both of us are okay.

Since we are very close, I decided to ask him for help by soliciting for sex with him, to ascertain where the problem is since they said my husband and I are okay. At first, he entertained fears but I assured him that it was going to be something confidential and nobody would know about it. After much pressure, he accepted.

“Our first meeting was on April 8, 2017 at Dunami Hotels, Lafia. I footed the hotel bill. We had a marathon session that lasted the better part of the night. I didn’t use any protection because I was ovulating. In the morning before we departed, we had a quickie.

It was a parting gift for me and he kissed me goodbye. That month’s end, I missed my period. After that month, I conducted a pregnancy test and it was confirmed positive. I broke the news to Kulungu, he was delighted about it, though he wanted me to abort it. I refused and vowed that I will keep the child.”

That has put her husband, Funtuwa, in a state of confusion as he vowed not to keep someone else’s blood in his house. “I told her parents about this development and they simply asked me to send her packing to go meet the said Kulungu, and that she should never come to them for anything,” he said. “They sympathised with me. I have already asked her to leave my house within 30 days, though the chief has asked me to seek divorce through a court but that is a long process. Moreover, I don’t have money to hire a lawyer.”

He is hopeful of remarring someday but not any moment soon immediately as he does not keep girlfriends outside marriage. He, however, promised to commence the search for another wife after Salamatu might have left his house within the 30 days ultimatum.

The wife, hardly moved by all the hoopla, said she is prepared for anything. She told our correspondent that her husband has a serious problem with low sperm count and may likely run into the same problem if he gets married without having the problem permanently solved. “Staying with him will amount to a waste of time,” she said. “I’m ready to leave his house within the specified time. I have a handwork (tailoring) with which I can take care of the baby.”

And where is Kulungu the father of the baby, in all of this, you finally found the voice to ask Salamatu. “He is not ready for the child, he has run away,” she sighed. “The last time I spoke with him, he told me he was in Lagos looking for a job and that he will not return to Lafia any time soon.

But for me, I will keep the child and train him/her to any level. I have moved on with my life. If the child is a baby boy, I may not remarry but if it is a baby girl, I will definitely remarry someday.”