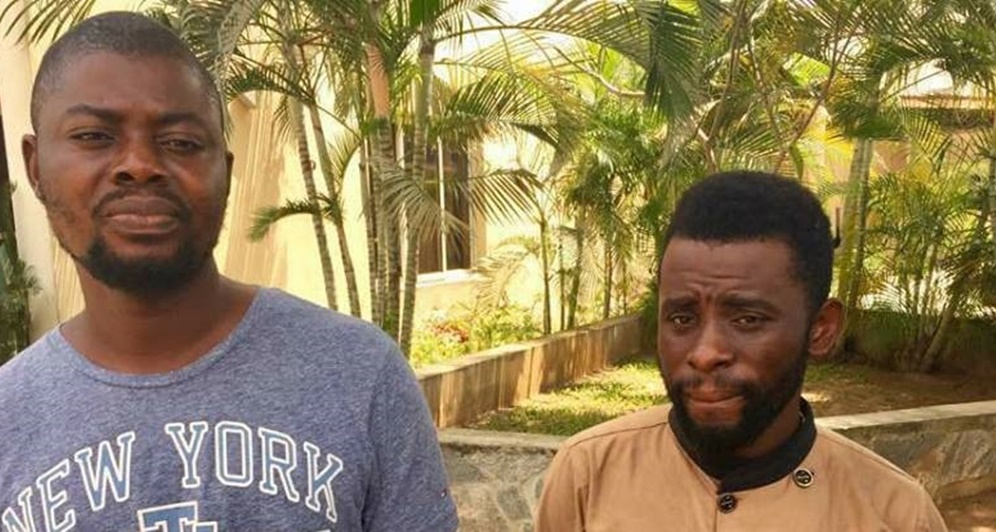 A Nigerian man,Oloye Abiola Iyiola, had his cook arrested for engaging in fraudulent activity such a Forex scam and cloning of bank cards. It was reported that the cook whom was employed two weeks ago, was apprehended alongside his accomplice by police operatives after he was set up and caught while trying to exchange fake dollar bills with real ones.

Mr Oloye took to his Facebook page and wrote;

I recently employed a cook 2 weeks ago who according to him had recently relocated from Abuja. He had full references and ID etcetera. To cut a long story short, a week after he started working, he told my nanny that he specialized in cloning atm/bank cards and replacing real forex with counterfeit so the bosses could not suspect as the card will never be taken out of the house nor the quantity of the money reduce. He basically asked her to look around for any forex, higher denominations the better and take photos of it as well as any atm card she could find preferably not naira.

She told me this a day after and to be honest i wasn’t exactly buying the story but felt it was too ludicrous for her to make up plus he is a rather stellar cook. Plus i had no forex at home. I asked for proof before taking any actions and she proceeded to record their conversations. I also put a recording device in the kitchen unknown to her.

Anyways, she was right. He called several names of other cooks in the lekki/ikoyi/victoria Island neighborhood who were all part of the racket and said almost all the cooks/stewards from Cotonou did it and they have a forex printing plant near seme border.

Lots of cooks called him in the period asking for usd and sterling too from the conversations he had with them
He started putting immense pressure on the nanny saying to help him out and that he’ll share the proceeds with her after paying the forex printer.

Told her he was a millionaire and owned a house and car and she could have so much more to help her mom and family with if she cooperated. Offered to give her bible verses to embolden her as well as take her to his ‘baby’ who will ensure she is never caught.

Immediately he saw the photo , he called his contact to bring 1000 of the fake bills.
But told her she had to have the original bills ready for her to swap. As i chose to stay home as per the setup, she told him she had not access to my room until i left and she would need to be quick to exchange them. He gave her precise instructions on how to put the ‘fake’ bills into the old bills so nothing looks different.

He was suitably shocked. So both of them arrested. According to them it is a normal thing for them especially anywhere with access to forex. If I didn’t tell my nanny to tell him we had forex, he would have probably quit shortly after and look for employment elsewhere

See the picture of the cook and his accomplice who happens to be a steward to someone’s else in Idejo.