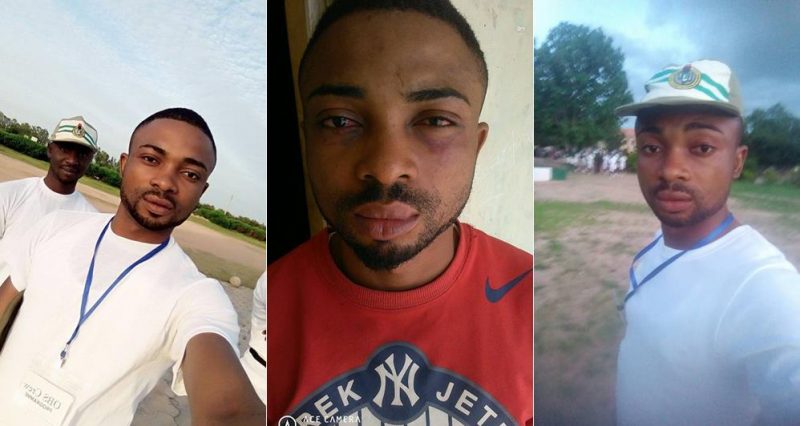 A Corp member identified on Facebook as Genesis Newbreed, has taken to the platform to demand for justice after he was assaulted by Policemen in Katsina where he was deployed to for his service year. According to him, he never stole but was on his way back from church when the incident occurred.

Here’s what he wrote;

This is what I get for serving Katsina state and Nigeria.

I never fought or quarrel with anyone.

We had just closed from Friday church service, some were having some discussions with the pastor on our way home. Before we knew it, someone gripped me and another by our waist belts. It’s the police.

We tried to explain, “we’re corpers!” “we just left the church now!” Instead of listening to us, another came, gave us hot slaps and forced us to enter their pickup. Our pastor tried to get attention to explain we were together, they whipped him with ‘koboko’ ryt in our presence.

About 30 of us were taken to the police station. I identified myself with every I.D card I had. But nevertheless we were thrown into a stinking, cold, mosquito-infested cell room to sleep on bare floor.

About 14hrs later (d next day). I became worried and agitated, I begged them to make phone call. They refused. So I requested that my offences be read to me because I was already in a cell for hours. I told them I have a right to a phone call and to know my offence.

The next thing is that they brought out and used baton to brutalize my knees and ankles while the other was slapping me.

I have never had a police case and I’m suffering this much for serving this country.