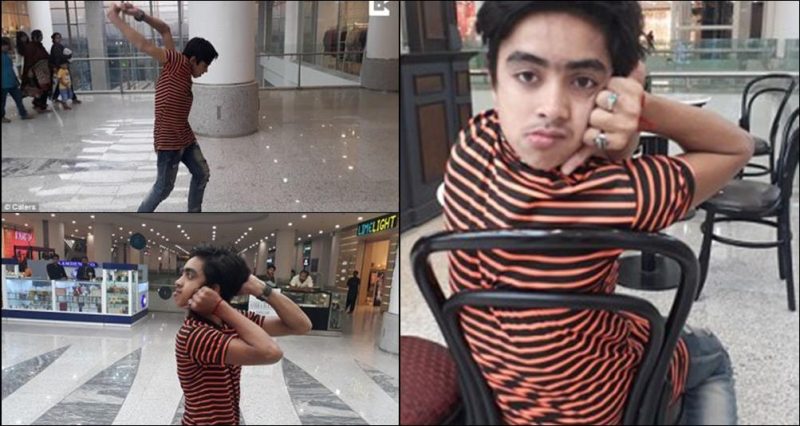 This is Pakistan’s ‘human owl’ teenager who can turn his head 180 degrees to look directly behind him.

Muhammad Sameer, from the southern Pakistani city of Karachi, uses his hands to help rotate his head back over his shoulders.

Now the 14-year-old is hoping his unbelievable flexibility will land him a part in a Hollywood movie.

The teenager, who trains constantly to keep up his elasticity, said: ‘I would have been six or seven when I saw an actor in a Hollywood horror movie turning his head to look behind him.

‘It fascinated me. I started practising for it and within few months, I was able to it.

‘My mother slapped me when she saw me doing this and told me never to do it again as I might end up hurting my neck but with time she realised that I’m God gifted.

‘My dream is to work like that actor in Hollywood horror movies.’

Sameer quit his studies and became part of a dance group, Dangerous Boys, to earn a living and help his family run the household affairs after his father fell ill.

‘I work so that I can support my family. I don’t want that due to lack of resources my four sisters do not have to quit studies.

He has found several fans in his dance group and never shies away from showing his incredible talent.

Pregnant teenager involved in car crash gives birth at the roadside, then dies

10 countries that hate the United States the most – See which is #1! (+Photos)

10 worst countries for women – You can get raped if you visit any of these countries!