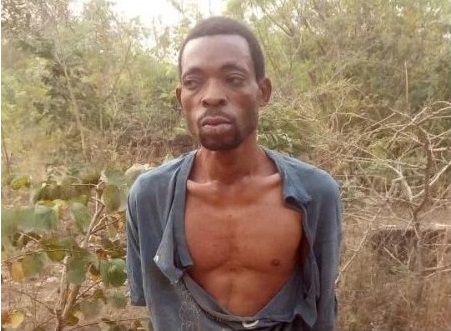 The Ogun state police command has arrested 29-year-old driving instructor, Festus Udo, pictured above, for raping and strangling a female youth corps member, 23 year old Modupe Taiyese, at Abule Ayo in Mawuko, Odeda local government area of the state. Parading the suspect before newsmen at the scene of the incident yesterday, the state commissioner of Police, Ahmed Ilyasu, said the suspect was a driving instructor‎ with Lizzy Driving School, Abeokuta, where the victim registered to learn driving. Udo had lured Modupe into the bushes with the promise of getting her a driving permit while teaching her how to drive.

Trouble started when Modupe did not return to the lodge where herself and other corps members reside. A case of a missing p[erson was filed by the coordinator of the NYSC in the state, John Okon.

‘We went for a powerful, technical screening of fact left behind by the last person she made contact with, who is the suspect. Technically the information led to one person by name Festus Udoh, an indigene of Oromi from Edo state, who was teaching this innocent deceased corper, Taiyese Modupe, how to drive. We were able to uncover this nefarious act and he led us to this place and confessed. The man tactically and deceitfully convinced her on Saturday evening that her driving permit is ready. She decided to answer to his call and he cleverly and deceitfully apprehended this lady and brought her down to this forest where he had a forceful, illegal and unlawful carnal knowledge of her and thereafter strangled her to death. The passport photographs of the suspect were found at the scene of the incident which is a remarkable scene of crime evidence,” he said.

Speaking to newsmen, the suspect said

He will be charged to court soon.