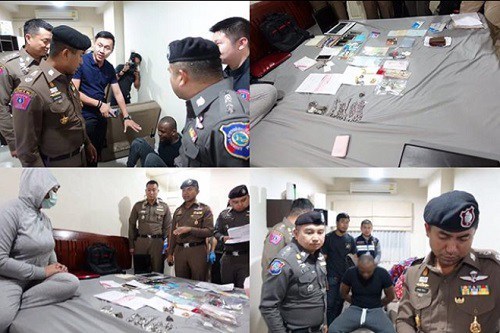 A 35 year old Nigerian man known in his local community as “Starboy” has been arrested in Bangkok by the Thailand police for scamming lonely Thai men. According to reports, the suspect identified as Antonio Joscarlos, along with his 20-year-old Thai girlfriend called Sukanya Sakaew, had used a fake Facebook profile to con lonely middle aged Thai men looking for love by pretending to be a beautiful American female soldier on Facebook.

The suspect and his girlfriend were caught at their JP Smart Condominium in Pak Kret, Chaengwattana area as a part of the government’s crackdown on foreign criminals.

They were chatting to 38 men at the time of their arrest. Victims were persuaded in the “romance scam” to send money to their account.

Police found six mobile phones and a few bank books at the apartment, which had a circulating fund of THB3 million (nearly US$92,000).

Taken into evidence were a computer notebook, ten phones, bankbooks, cash and other valuables. “Being single is not a disease” – Nollywood actress Dayo Amusa advises

Atiku responds to I Go Dye’s Open Letter, invites him for chat