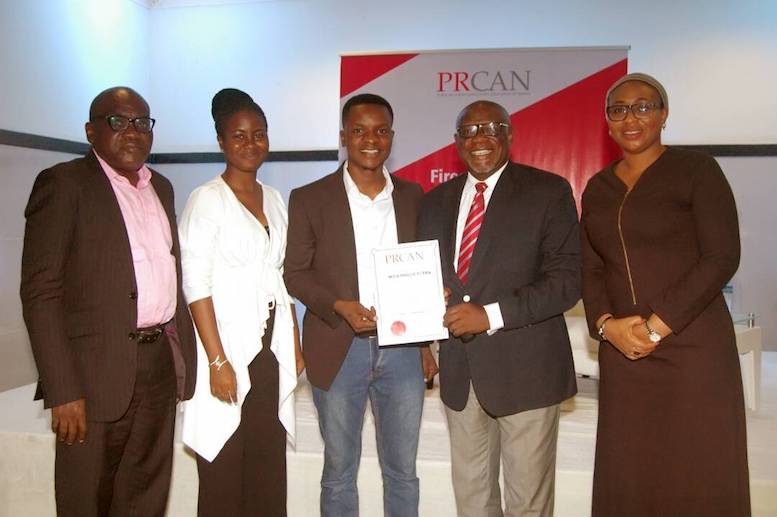 Fast-rising Lagos public relations agency, Media Panache has joined the list of certified agencies recognized by the Public Relations Consultants Association of Nigeria (PRCAN) on December 13th, 2017 during a forum held at The Civic Centre, Victoria Island, Lagos. The company, which recently made headlines following a win at the 2017 Future Africa Award in the ‘Best Media Enterprise’ category about a week ago, was represented by the CEO Timilehin Bello who received the certificate on behalf of Media Panache from PRCAN President, Mr. John Ehiguese.

Media Panache Nigeria was launched in 2016 and the agency has steadily climbed up the ladder; being widely recognized as one of the youngest and innovative Public Relations agencies of the new school – mostly owing to their creative approaches in the execution of projects they are vested with, and their effective exertion of new media vehicles.

Earlier this year, the company in conjunction with web hosting company WhoGoHost organized a forum entitled ‘Build a Business Empire’, aliased #BABEInLagos2017 as part of their continuous CSR efforts; where they enlightened attendees consisting of SME owners and individuals on the usage of digital media and several ways it can be harnessed to augment business opportunities.

The company also kicked off a campaign in mid-2017 named ‘#InspireYoungsters’; where a handful of secondary schools in Lagos were visited and taught the importance of social media in a contemporary age as well as how it can be wielded to yield positivity.

Media Panache has consistently described their numerous activities as impactful methods of making a significant difference in the society, consistently targeting the youths, youngsters and industry top guns.

The company boasts a long list of clients consisting of venerated names in the corporate and entertainment industry who they have worked with since their inception – some of which include, Bank of Industry, MTN Foundation, Simplified Corporate Logistics, Jumia, Jumia Food, Instant Apartment, Instant Pickup, Alibaba, One Africa Music Festival, Skales, Solidstar, Korede Bello, WFM, St. Ives Hospital, and several others.