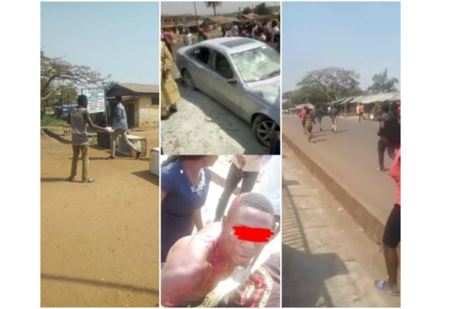 There’s been tension in Benue, following a clash between youths of the state and Hausa community in Makurdi, the state’s capital today. It was gathered that violence in  Wadata area of Makurdi, Benue state erupted after a Fulani man was hit and killed by a vehicle.  An eyewitness who spoke to TheCable claimed that many youths were reportedly injured in the clash, in the area which has a high concentration of Hausas and Fulanis. The source further disclosed that businesses and markets in the area have also closed for the day as a result of the violence, as cars are being vandalized by irate youth in the area which houses the city’s main abattoir.

Recall that he said;

We, the association wrote a letter to him, even met him.
.
We told him that this law cannot work. We told them that there is an international cattle route from Niger to Eastern Nigeria. He said he will not allow cattle to pass through Benue state even if it is the cattle route.

We told him that if he wants to implement that law, he must provide a land for us to rent. He did not provide any land for cattle herders. They have been in that state even before colonial days and co-existing peacefully.

We advised him and he refused to listen to us. We are not against that law but he has to provide a land for these people before implementing such a law. If there is no land, there is a problem.

The civilian Joint Task Force that he introduced are inflicting pain on the Fulani herdsmen. They attack and seize their animals. They drag them to the nearest police station where huge amount of money is collected before they are granted bail. .

This is the cause of this problem. If you attack a cattle herder and collect his cattle, he has no choice but to attack. The law is saying that herdsmen should not pass through the state even if it’s a route to another area. .

In the past , if there was damage by the cattle , we had ways to settle the matter. When you damage a farm, you have to beg the owner , if they refuse, you pay for the damages.
This has worked for us for years till Benue State decided to implement the anti-grazing law. We have challenged the law in court and till court decides which way forward, Ortom will be held responsible for any further bloodshed” he said.

‘Never expect a man to be faithful, just be an amazing wife/girlfriend’ -Gifty