The full lineup of the most anticipated Californian festival, Coachella, has finally been announced and Nigeria’s Wizkid and Jidenna are up there, carrying the flag of the country.
From the lineup published by the organisers on their social media, the headliners of the two-weekend event include Beyoncé, who cancelled her appearance last year because of her pregnancy;The Weeknd and Eminem, while other performing acts at the event include chart-topper, Cardi B, Post Malone, Miguel, and many others.
According to Guardian UK, “Coachella, which began in 1999, has become one of the most successful US music festivals. Beloved by fashionistas and celebrities, it now attracts 250,000 people across its two weekends in the Indio valley near Palm Springs.” And for this year, Beyonce will headline the April 14 and 21 events, same as our star Wizkid who is fast becoming a legend in his own right ever since he smashed the borders and collaborated with Drake, opening the doors for his counterparts based at home; while Jidenna will prove why he is the Classic Man on April 15 and 22.

This year’s event will kick off on April 13 through April 22nd, and we can’t wait to see how it pans out for our faves. 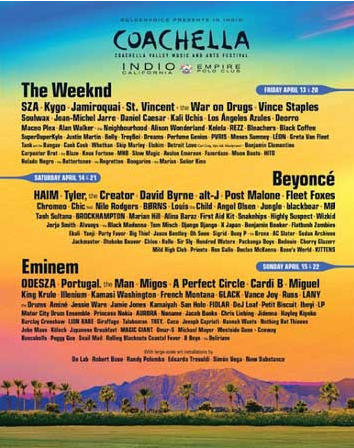