George Weah: the untold story of a ghetto child turned President of Liberia – This will move you to tears (With Pictures) 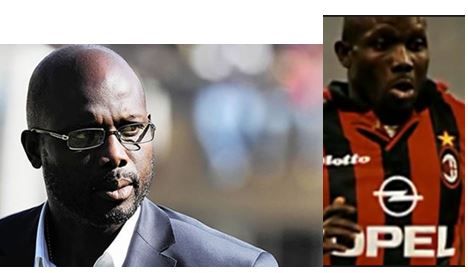 He cried, the champion. Thursday, December 28, George Weah, the star of African football, won the most important game of his life. But in his own country this time. At 51, the former international footballer has been widely elected president of Liberia. In front of a crowd in trance came to applaud his “hero”, he struggles to hide his emotion.

By the way, that night, in Monrovia, nobody tried to hide his. In the capital, immersed in an unparalleled euphoria, thousands of fans sang, danced, shouted and celebrated their future president. “Mister George” is their hero, “the one who will finally give us a voice” , repeated his supporters came to celebrate in his headquarters.

His popularity, already growing during his career abroad, is exceptional among the most disadvantaged classes of Monrovia, who represent the bulk of the population , crammed into the many ghettos in the capital. “Imagine that you live in a country where a small elite has everything, and the rest has nothing.Today, our new president will give back his power to the people” , explained, tears in the eyes, an old lady come to participate to the festivities.

Prev post1 of 4Next
Use your ← → (arrow) keys to browse
Tags: countdown postGeorge Weahphotos
Share12Tweet8Pin3SendShare