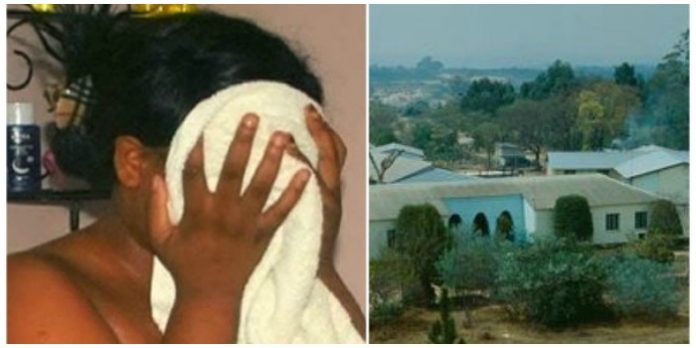 A heartbroken Zimbabwean man identified as Isaiah Zhou, almost committed suicide after walking in on his wife Elizabeth Ndlovu, having sex with one Aleck Moyo, who she introduced to him as her Uncle. A Police source disclosed that Zhou returned from work much earlier than his wife expected, and busted his wife with her alleged uncle who had been her lover from her school days.

“Before the incident he had also been suspicious of his wife’s conduct after he was tipped by neighbours that the man (Moyo) whose wife was claiming was her maternal uncle and was always visiting his house and sleeping with her when he was away.”

“Fortunately, when he arrived home he found the door to the bedroom not locked.

When he suddenly entered Zhou could not believe his eyes when he found Moyo and his wife busy in the act,” said the source.

It was gathered that this was not the first time Zhou who attacked his wife and her lover with a stick, having sex with another man. Sources claimed Zhou who tried to report the matter to the police but was advised against it owing to the fact that his wife consented to it, reportedly caught her two years and she apologized.

On the other hand, a pupil identified as Desmond Mavhunda, from Manzunga Village in same Zimbabwe, was caught red-handed with Shantel Murove, his landlord  Charles Chibwayi’s wife.

B-Metro reported that while Chibwayi and their child were fast asleep, his wife was in the habit of tiptoeing to the pupil’s room to have sex.

On the day they were busted, Chibwayi was reportedly awoken by his wife’s screams of pleasure which were emanating from Mavhunda’s room.

When he went to investigate, Chibwayi who initially thought they were screams of help was shocked  and almost fainted after he discovered that it was screams of joy by his wife who was being given the time of her life by Mavhunda.

“What happened is that Mavhunda, a pupil at Chinyoka Secondary School who was renting a room at Chibwayi’s shop fell in love with his wife.

The two (Mavhunda and Murove) were in the habit of waking up late at night to have sex. Murove(the wife) was the one who would go to Mavhunda’s room.

“On the day they were caught, Chibwayi was awoken at around 11pm by his wife’s screams which were coming from Mavhunda’s room where they were having sex. When he went to see what was happening he was shocked when he found the two having sex.

“Fearing for his life, Mavhunda who was still Unclad was forced to flee through the window stark Unclad,” said the source.

Chief Nemangwe who confirmed the incident, disclosed that Chibwayi approached him to have the pupil pay damages, apparently to cleanse the room he was busted “doing” his wife.

“When the matter was referred to me, Chibwayi’s wife claimed Mavhunda invited her to his room under the pretext of fetching some money. While inside his room, she claimed Mavhunda locked the door and tried to force himself on her. She denied sleeping with him.

“On the other hand, Mavhunda said Chibwayi’s wife was the one who was pestering him for sex.

After Murove repeatedly claimed that Mavhunda wanted to force himself on her, I advised her to report the matter to the police for attempted rape but up to now I hear she hasn’t done so and her husband who seemed to have been disturbed by the incident is insisting that Mavhunda should compensate him for bedding his wife,” said Chief Nemangwe.