Meet Mansa Musa, the 14th century African King who is the richest man in history of humanity – He was worth over $4Trillion (With Pics) 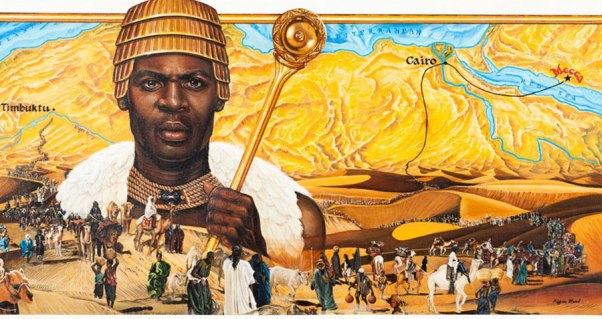 It was when Musa made his Hajj to Mecca — an important part of the Muslim religion, which was very widespread in the region at this point in history — that the rest of the world became aware of the extent of his wealth.

Because he had so much to spend, his caravan throughout Cairo, Medina, and finally to Mecca had a procession of more than 60,000, dozens of animals, and plenty of gold. In fact, as they traveled, Musa and his entourage gave gold away to people in the streets.

They also bought lots of stuff — so much stuff, in fact, that they actually messed up the global economy for a while: The gold he spent circulated, and there was so much of it, that the value actually went down.

The disruption eventually evened out, in part because Mansa Musa began borrowing from lenders in Cairo (despite the high interest rate) and essentially single-handedly controlled the price of gold in the Mediterranean.

The Lasting Contributions Of Mansa Musa’s Wealth
So what did Mansa Musa do with all the money, aside from giving away bricks to random people in the street and using it to buy souvenirs?

He actually ended up using most of it to build a great number of mosques (legend says he built one every Friday of his reign), the most famous of which is the Djinguereber Mosque. He also commissioned many universities throughout the kingdom — many of which, along with the mosques, are still standing today, some 700 years later.

Musa quite literally put himself, and his empire, on the map when he made this journey — maps from Italian cartographers during his reign had artists add his likeness, holding a nugget of gold of course. He extended the reach of his trade ports and became one of the most powerful rulers of his time — if not in all of history.