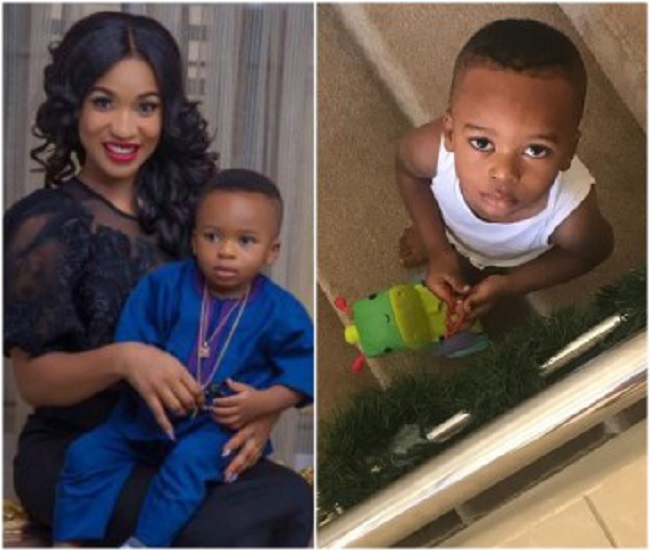 Nollywood actress, Tonto Dikeh took to her Instagram page to pour encomium on her son, Kind Andre to celebrate is 23rd month today.

King Andre will be 2 next month. She wrote;

“MY HEAVEN ON EARTH
HAPPY 23rd MONTH BABY BOO
YOU ARE AMAZING, YOU ARE STRONG, YOU ARE GREAT, YOU ARE FAR ABOVE A 1000REASONS WHY..
YOU CANT BE PERFECT BABY COS NOBODY’s, PERFECT DARLING..
BUT HEY LITTLE JUICY MAN NO ONE IN THE WORLD LIKE YOU..
YOU ARE UNIQUE, GREAT, FAVORED, GRACED AND ABOVE ALL LOVED..
I LOVE YOU, HONEY, GOD BLESS YOU REALLY GOOD SON..

I CELEBRATE YOU SIR

Meanwhile, her ex-husband Churchill Olakunle has sued her over son’s role in her upcoming reality show.

Mr. Churchill filed a suit against his ex-wife at the family court of the Lagos State Magistrate court.

Tonto has decided to lay bare her life for all to see on the new reality show titled, “King Tonto.”

In the footage, Tonto strips stark naked whilst surrounded by a surgical team and is seen undergoing a breast and butt enlargement in a popular Lagos-based cosmetic surgery hospital.

The procedure was filmed in real time.

“My body has been something that I have always been extremely ashamed of,” she revealed in the clip.

In the trailer of the reality show, Tonto also talks about life as a single mum, life as an actress, her fears, her struggles, and finances.

This is said to be the first step to be taken by Mr. Churchill towards protecting his son’s rights as captured under the Child Rights Law of Lagos State.

Following this development, the reality show which was originally expected to debut in the first quarter of 2018 might be halted.

The estranged couple met two and a half years ago at Escape Nightclub in Lagos during his brother’s birthday party.

Tonto got pregnant six months after they met, and they later married.

In February 2017, the Nollywood star confirmed there were cracks in her 17-month-old marriage.

She revealed she had moved out of the house with her son. By June 2017, Tonto’s dad returned her traditional marriage bride price to his ex-son in law