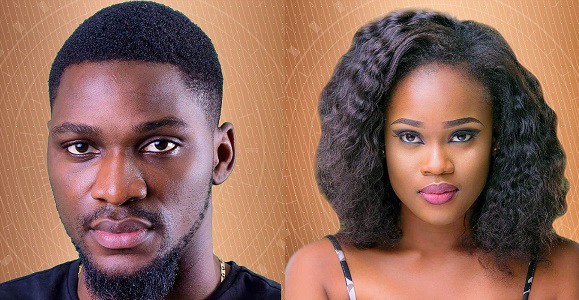 The Monday Nomination Live show has come to and end, with a surprising event that happened. After the nomination process, BamBam and Rico, Leo and Ifu Ennada, Angel and Ahneeka were those with the highest nominations and hence, they were put up for eviction.

Since Tobi won the Head of House, he had the opportunity to save a pair of housemate and replace with another.

Surprisingly, Tobi put up his former strategic partner, Cee-c alongside her partner, Lolu and saved BamBam and Rico.

The shock on Cee-c’s face was priceless!

Therefore, LiFu (Leo and Ifu Ennada), GeLah (Angel and Ahneeka) and CeeLo (Cee-C and Lolu) have been nominated for possible eviction on Sunday.

This is coming few hours after Big Brother Naija 2018 housemate, Tobi disclosed why Cee-C is dangerous to him in the house. Tobi said this to Miracle and Nina while reacting to Cee-C’s threat, to report him to big brother if he comes close to her.

According to him, Cee-C is a girl that comes into your life to spoil all you have built.

”Why will Cee-c be be talking about me like that. What if people are not watching to hear she is lying, they will think I am really like that. Abeg that girl is too dangerous for me, all this might be her game plan. Henceforth I am not going close to her.”

BBNaija 2018: Teddy A and BamBam caught having sex again in the toilet (video)

#BBNaija: Here are the housemates nominated for possible eviction