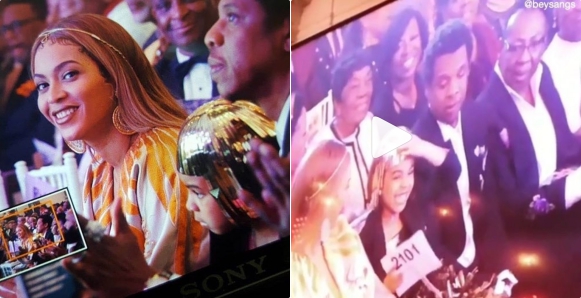 Six-year-old Blue Ivy stole the show when she decided to bid $19k on some art, as her parents tried to pry away the bidding paddle from her grip. Last night, Beyonce, Jay -Z and Blue attended the 2nd Annual Wearable Art Gala at Alexandria Ballrooms in Los Angeles, in matching outfits. The evening’s theme was ‘From WACO to Wakanda’ and everyone’s outfits reflected the Black Panther. Sitting in between her parents waving the paddle board to grab the auctioneers attention.

Then came the moment when Blue jumped in on the live auction event and bid $17,000 on an acrylic painting of the actor Sidney Poitier. Her dad Jay Z’s reaction to that is just priceless. Watch below.

Jay Z tried to stop his daughter from bidding the tens of thousands of dollars but failed Blue Ivy didn’t even give up when the price bumped up to $19,000. Blue was asked by the auctioneer if she’ll bid 19,000 dollars. Blue waves her number excitedly and beams when her name is called out to the crowd. But Jay Z appears to be smiling through gritted teeth and even tries to put her hand down. Press play to watch:

Vanity Fair reports Blue Ivy lost the bidding war to Tyler Perry, who won the painting for $20,000. But that didn’t stop Blue Ivy, who next bid $10,000 and won a different piece of art made up of deconstructed law and medical texts.

Reactions to video of Blue Ivy bidding $19000 for art after it was posted on Twitter include:

One fan laughed: “Jay Z looking at her like, ‘You got art money?’”

One commented: “BlueIvy spent 19k last night on art she a young baller.”

And one added: “Jay was not with it.”

The famous family were out in LA on Saturday night to celebrate the 2nd Annual Wearable Art Gala at LA’s Alexandria Ballrooms.

The Wearable Art Gala was put on by WACO Theater Center – which was co-founded by Beyonce’s mother Tina and her husband Richard.

The night embraced a Black Panther inspired #WACOtoWakanda theme for the evening.

Blue Ivy is also trending at this moment for writing these adorable messages to her mother Beyoncé & her daddy’s mother, Gloria.