#BBNaija: Moment Teddy A pulled out BamBam from her fans while they were taking photos (video) 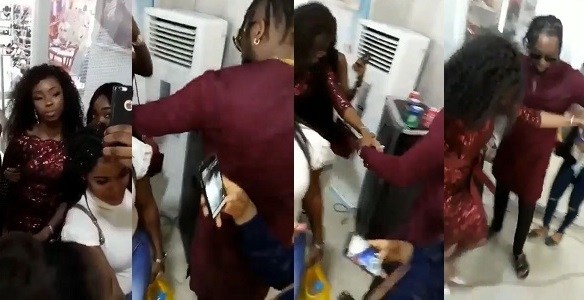 Former Big Brother Naija 2018 housemate and musician, Teddy A got tired of waiting for his boo, BamBam while she was having a ‘fan love’ moment at a recent event.

While fans took photos with BamBam at Payporte’s offline store, during the presentation of Miracle’s arena games prize, Teddy A got impatient.

He hurriedly grabbed her by the hands and walked away with her, leaving the fans she was with. Though some folks are saying on Social Media that he didn’t ridicule the fans, but then, they had taken enough photos, and he couldn’t wait no more.. So, he “romantically”, “nicely’ took her away from the crowd.

elmodelmgt: They should all enjoy the big brother fame that only lasts for 1 month afterwards Nigerians would forget them easily go ask the previous housemates can’t even remember their names again.

adamafaith_onu: I just love the way he took what belongs to him. No time to waste time

talltee_thoseen: Ahh people where the ridicule I wasn’t there but that wasn’t a bad intention very obvious they had another outing

ricky_lace: Why didn’t he allow her enjoy the famzing.. Is it cause they didn’t famz him.. Just saying

philconcepts: This people can become greater person tomorrow so y treat them like nobody @iamteddya

arinshyna: He is very respectful to her. He could have being yelling aggressively at her to hurry up but instead he excused her like a gentleman.

heart_uppah: This is not ridiculing please he even waved either to say sorry or respond to a greeting .. he needs his woman and that’s not too much to ask

mz_lawvet: I don’t think he is possessive but in a hurry. Yes there are better ways to have discharge them but well that is his own method… Leave the couple alone.

imperfecttahtah10: He even told them bye bye and carrying hand bag, of teddy, he never expected to fall inlove.

adepejucatering_service: All this people taking pictures up and down enough biko kilode. Una wan do photos album? Now see as them disgrace una Camera Phone

no wonder bubu said the youths are jobless

eti_frank: I don’t know why, but I love what he did… it shows he is responsible for her and couldn’t leave her there alone.

iamayooladipo: I really think he needs to relax and not let is fans down @iamteddya let’s feel the street OG in you not this Kanye Kim things

kikeshair: This is why my husband sees these yeyebrities all the time and throws his face away like no one is there

The eye popping dress a bride wore to her wedding that has tongues wagging! (Photo)