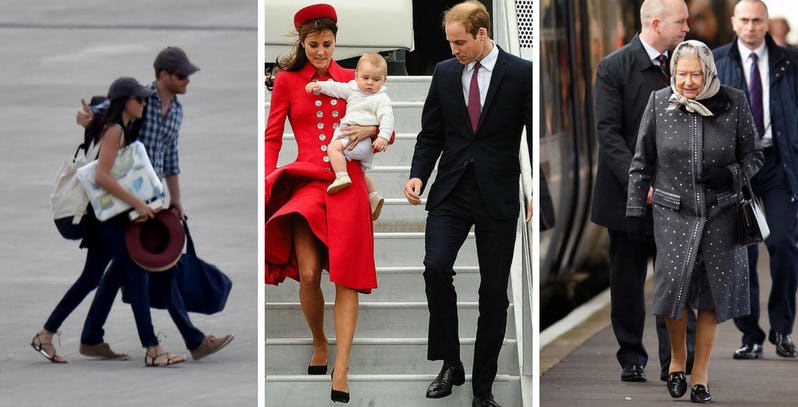 Let’s make something very clear. The Royals are the weirdest set of people on the planet. No, really. Behind the gracious waves and glittering tiaras, this family is being held captive by more rules than the Church of Scientology – even Tom Cruise doesn’t want to join this lot. As Brits gear up for literally losing their minds with Meghan Mania, the rest of the world isn’t far behind. The “2.0” of Kate Middleton’s 2011 wedding to Prince William is all anyone can talk about, and it gets juicy when you learn neat little facts –like the fact that Meghan Markle’s old divorce (which is going to stick like glue) was a blip in ancient laws that the Queen let slide. It kind of ends there, though.

If royals aren’t hiding behind palace doors, they’re out in the open. What are they doing? Traveling. Where to? Everywhere. The British Empire basically used to own the whole world. In nicer ways, the grip is still there though – for the 53 countries Her Majesty the Queen has as part of her Commonwealth. But this family has more rules than countries it has reigned over. Everything from the way Kate Middleton drinks her tea to how she must stand, sit, wave, and dress is controlled, and the “Royal Travel Protocol” is no picnic.

If you thought these people are fancy Kardashians with a fleet of private jets and appetizers on-tap, you need a reality check. Alongside banned board games, these travel rules dictate the food royals chew, how they do it, when, and in what order. At the same time, royals are being treated like the common folk they wave down to. In the weirdest set of codes we’ve ever seen, here are 20 strict rules that royals must follow when they travel.

The royal lineage is literally sacred. Keeping Up With The Kardashians might have #family as its mantra, but the royal family is built on this idea. Over 1200 years of British monarchy has been passed down the bloodline from king to queen, and the succession to the throne is something royals are terrified of breaking. The official protocol, as reported by The Times, is that two heirs cannot travel on the same plane in case it crashes.

Royal protocol prevents two royal heirs from traveling on the same flight in case of a crash. Protecting the royal lineage and succession to the throne has gripped this family for over 1200 years. Even Kate Middleton’s toddlers have to abide.

This means that Prince William and Prince Harry are not permitted to share a flight. In 2014, when Prince William and Kate were on an official visit to New Zealand, the travel situation got tricky. Their children, Prince George and Princess Charlotte are as much heirs as their parents are. When Kate traveled with Princess Charlotte, where did little George stay? Home with his nanny, according to Hello. The Queen has been known to relax the rule once in all her 52 years on the throne. William was allowed to “bend the rules” for his nine month-old baby. Once.

All royals must travel with a fully packed, all-black outfit in case of a funeral. That’s non-negotiable. Each and every member of the royal family must pack funeral-appropriate black clothing should the worst happen while they’re off British soil. British monarchy takes the mourning process on a whole other level. No, really.

The loss of a royal family member will have every flag in Britain flying at half mast, and the country basically stands still. It’s quite a sight – every town hall, castle, and crumbling mansion displays the official mourning code, although there’s been some scandal there. When Princess Diana tragically lost her life in a 1997 car accident, the Queen decided that flags would not fly at half mast. Princess Diana had already divorced Prince Charles in a bit of a disgrace, and the Queen saw no reason to change the flags for an “ex-royal,” according to The Sun.

You’ll generally see the royals in smart, preppy, and neutral colors. Kate Middleton sticks to royal blues, ivories, and fur-piped jackets in winter (matching hats, of course). But among the neatly packed dresses and button-down coats, there’ll be an all-black alternative whenever any royal flies. The next one just blows our minds…