Kim Kardashian VS Beyonce: 15 photos that show how these two wealthy ladies outspend each other and who is richer 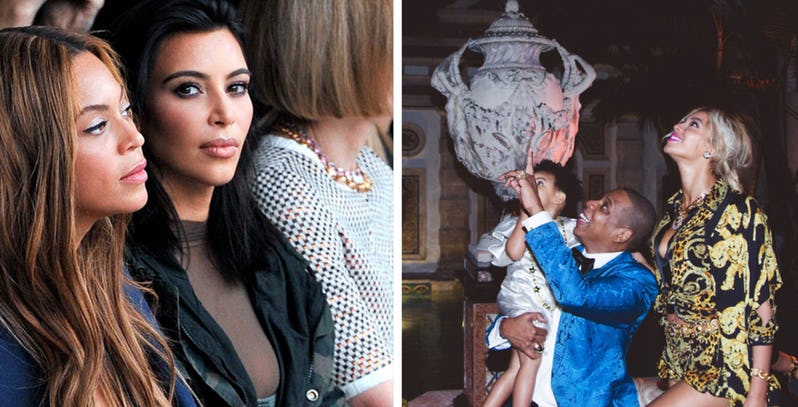 No introduction is necessary when we talk about Beyonce and Kim Kardashian. Both of these women are each a powerhouse in their own right and are extraordinarily wealthy beyond one’s imagination. They have lifestyles that are so over the top, they are unimaginable to the ordinary person. Add into the mix these women’s successful and wealthy husbands and the unimaginable becomes twofold, or in Beyonce’s case, threefold.

When you’re talking about the vast amounts of wealth that these ladies have, it is only reasonable to assume that their spending habits are relative to their income, so the sky’s the limit when it comes to buying things that are not a necessity. Today, we will compare the over-the-top luxury items that both Beyonce and Kim Kardashian own, but Beyonce has a bit of a head start on Kim because she has so much more money. We will see which one of these ladies win the battle of “who has the most expensive things?”

15 Shoes – Beyonce Hits It Out Of The Park

Beyonce shelled out $312k for a single pair of stiletto heels from House of Borgezie for a music video. According to the owner, Chris Shellis, the singer purchased the diamond-encrusted, Princess Constellation stilettos that are dripping with 1,290 diamonds, over 65 carats, and accented with butterflies in blue jewels with brilliant red heels. They come in platinum or 18-karat gold. The sole and heel can be easily removed if there is any sign of wear because the shoe is designed to “last forever” and comes with a 1,000-year guarantee. The British designer said the shoes are designed to make “every woman feel like a princess,” or like Queen B, in this case.

How could it even be possible to top that figure for a pair of shoes? I’m afraid Kim will not win this battle, but she most certainly is entitled to an honorable mention in this category. So just how honorable a mention will Kim get? Well, in her closet she owns a pair of $90k sneakers. Yes, I said sneakers, the kind of shoes you workout in. Kim has stated, “I have love affairs with so many shoes, ridiculous, right?” You answered your own question, Kim! Well, she went on to say about her expensive sneakers, “They didn’t [manufacture] a whole lot. Luckily I know someone, who was able to get me a pair.”

We all know Beyonce goes by the name Queen B, but would we ever guess that maybe the “B” stands for bags? The diversity of bags she carries is amazing, from the cheap to the unbelievable. In her collection, she has designers like Alexander Wang and Diane von Furstenberg. She has not one, but two, Alexander Wang Marti Backpacks. One is blue and the other is bright pink, each costing $895, which is just chump change compared to the Hermes Crocodile Birkin bag she owns, which is listed as one of the most expensive bags in the world. Hubby, Jay-Z, bought several Hermes bags for her as a Christmas gift a few years back and it set him back $350k. Beyonce has stated that she receives plenty of freebies from many different designers who are hoping she wears them when she goes out and about town.

Kim Kardashian will win this round, hands down, thanks to her hubby and his very generous, unique one-of-a-kind Christmas gift. Let’s first start by giving you a baseline price for a “regular” Hermes Birkin bag which is around $16,000. Well, Kanye gave Kim a hand-painted Hermes Birkin bag that cost— wait for it— $1.3 million dollars. Artist George Condo painted the bag with surrealistic figures on it of three women and a “monster man.” According to the artist, “If anyone views the painting as being a work of […], it’s not the painting’s fault. What’s happening in their minds should be banned, not the work of art, itself.”

5 things you need to know about Idowest, the new artiste Davido just signed

Check out these 6 BBNaija 2018 Female Housemates in lovely traditional bridal wears – Who would you love to be your bride?