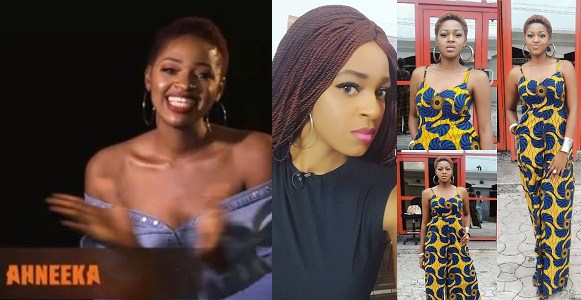 Ahneeka spoke on her acne challenge on the Cliffhanger show of Elozanam in a video published on the 12th of April, 2018 shortly after her eviction with Angel, her former strategic partner.

She blamed the aggravation of her acne struggles on the water supplied in the Big Brother House as it was impure thereby causing the spread of infections among other housemates.

It would be recalled that Ahneeka was trolled on social media about her acne battle which she appears to be winning. Social media influencer Noble Igwe didn’t spare her one bit as he blamed the acne problem on her poor hygiene.

“I had acne. I have been battling acne before I got into the house and then going into that new environment…. first of all, the water in there (Big Brother House) is not the best. So I just started reacting to it….everybody started reacting to it. Mine just came off and it was acne. The cameras are not very nice, they are not forgiving, they kept exposing me like that” she said amid laughter.

She further stated that the quality of the water didn’t encourage her to wash her face regularly as she believed it was aiding the acne growth.

The Big Brother Naija reality show which lasted for 85 days has also been criticized over the availability of food as the housemates were made to consume so much starchy foods especially as food materials provision was included in the game through a ‘wager system’.

The housemates consumed much of noodles for most parts of the reality show in South Africa and most of the participants complained of loss of weight during the contest won by Miracle.

Watch the video of Ahneeka’s interview below: (fastforward it to the 10th minute to hear the water crisis part)

Davido’s baby mama, Sophia Momodu slams rumours that she deleted her Instagram account, says she has been hacked

3 Reasons You May Love Casper Mattress