“I am extremely afraid of Eminem” – Nicki Minaj 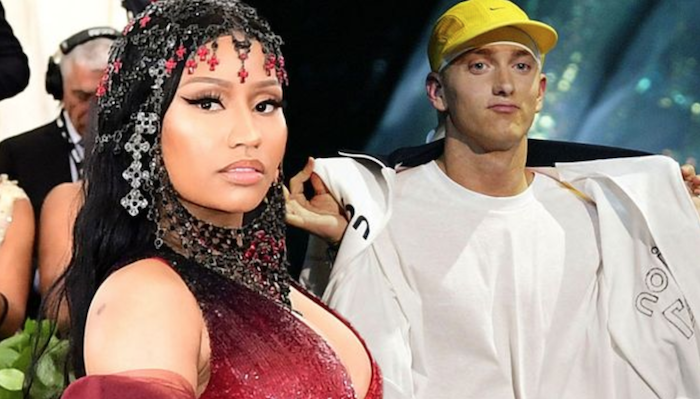 Nicki Minaj has responded to the sound of Eminem “screaming her name” in footage of another on-stage outburst, begging her to date him. Minaj reposted a clip of the ‘Lose Yourself’ rapper exclaiming “Nicki! Let’s do this!” while on stage at the Governor’s Ball over the weekend. “I’mma tell you something about Nicki that she don’t even know,” he continues in the clip. “We go together.”

Minaj wrote in the caption: “The sound of him screaming my name just completely confirmed..that I’m extremely & utterly afraid of Slim Shady,” followed by a crying face emoji.

Despite her reservations, the ‘Starships’ rapper also joked she’d use the audio as the intro to her upcoming album, Queen.

The hip hop stars have been seemingly joking about their potential romance since Minaj name-dropped Eminem in a verse of her new song ‘Big Bank’, claiming to have “bagged an ‘Em'”.

She also replied “yes” on social media when fans asked if the two were an item.

Eminem then took to the stage at a Boston music festival, asking Minaj to “text him later”, and declaring he’d like to date the Grammy Award winner.

This latest outpouring of emotion from Slim Shady now has fans on social media saying he’s taken the light-hearted flirting a step too far, and is “obsessed”.

“He should stop now. It’s not funny anymore,” one fan wrote on Instagram.

“Eminem crazy AF. She better friend zone that,” another added.