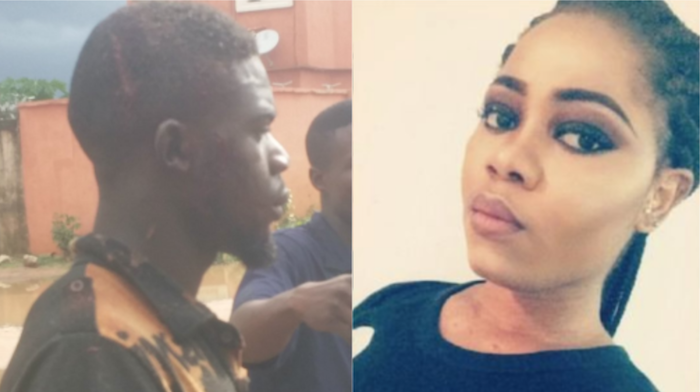 A young and beautiful Nigerian lady identified as Adanna Princess Tina  Charles took to Twitter to give a narration on how she saved a man from jungle justice today. According to the lady, the man identified as Abuchi had a misunderstanding with a bike man who then later mobilised his colleagues and labelled Abuchi a thief. His colleagues immediately descended on the man and almost set him ablaze.

#ThisIsNigeria the type of brutality i witnessed today scared the living daylight out of me. #Owerri is a terrible place with the worst government ever….

I kept on screaming on top of my voice trying to explain to the people that the guy is innocent. Not until some people that know the guy prevented them from setting the guy ablaze after pointing out the bike man that accused Abuchi of stealing from him. #ThisIsNigeria

Abuchi and his friend had a fight with a bike man from Umuguma and the best way he could revenge was to call other Umuguma ‘okada’ and told them that Abuchi robbed him. The same people he called didn’t bother whether Abuchi was innocent or not instead the stabbed him #owerri

#ThisIsNigeria I’ve read and heard about jungle justice especially when an innocent person is involved but i witnessed this today. Even the police i called didn’t respond. Abuchi’s life was spared because people overpowered the “okada” men. Am disappointed

The fear i experienced today is way out of it. This Ohaji/Umuguma okada guys are the worst. What happened to our peaceful Owerri? How can a normal human being accuse his fellow man of robbery just because you had a fight with him.

In all i thank God that this ohaji and Umuguma okada guys didn’t kill Abuchi because of false accusation. #ImoState government need to do something more about security. #JusticeForAbuchi

#JusticeForAbuchi he didn’t deserve what they did to him. If not for God’s intervention by using people around to stop the ‘okada’ guys from killing an innocent man it would hv been terrible. He was wrongly accused because he had a fight with a bike man.

#JusticeForAbuchi The bike man couldn’t fight back his fellow man instead he said he’s a thief so his fellow Ohaji/Egbema and Umuguma ‘Okada’ people can kill Abuchi. Calling someone a thief comes with a heavy price. People are heartless.

I still can’t figure out why someone would do this to his fellow man. If not for the grace of God this guy would have been killed and we weren’t even safe. Over 50 ‘okada’ guys came to my compound that werden train robbers. The almost burnt our house. This didn’t deserve this. How to Flirt like a PRO – No one will ever say NO to you if you know number 19!