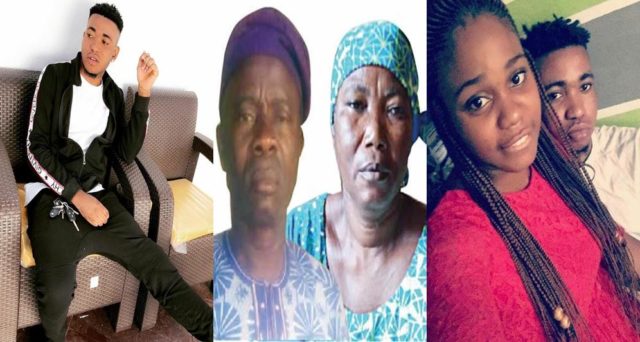 His countenance was a telltale that he was under an intense emotional pain. His eyes were bloodshot, evidence that he had struggled with sleep for almost four days without success, despite being sedated.
Occasionally, he looked up as he sat on a praying mat in his modest sitting room to acknowledge greetings from neighbours and friends who had converged there to commiserate with him on the death of his 22-year-old son, Adebisi. Why I killed OOU student and his girlfriend – Cultist…

That was the pathetic scenario on Tuesday at the home of Prince Adedeji Oriade-Oyede, a one storey-building located at Oju-Ore in Ota, Ado Odo/Ota Local Government Area of Ogun State, when our correspondent went there to interview him on the incident.

His son, Adebisi, who was a 300-Level Computer Science undergraduate of the Olabisi Onabanjo University, Ago Iwoye, was allegedly murdered alongside his girlfriend, Julia Imaga, on May 28, 2018, at Oru-Awa Ijebu axis by an alleged member of Aiye cult group, Babatunde Muritala and two other accomplices.

The two accomplices were Owolabi Razak popularly known as ‘Iku’ and one Sodiq, who is still on the run. Getting him to talk about the gruesome manner his son was murdered was quite difficult. He appeared to have relapsed into an emotional trauma, just like someone reliving a horrible encounter from a nightmare.

After asking our correspondent to sit on the vacant seat beside one of the sympathisers, he began, “Adebisi would have been 22 years old on November 27, 2018, but for those wicked people, led by Babatunde Muritala who cut his life and destiny short.

“He was born on November 27, 1996. He was such a quiet and easy going boy who abhorred any form of trouble. I never heard that he ever fought with anybody.

“He was the second child among the three children their mother, Maria, had for me.” Adebisi, according to the Ogun State Commissioner of Police, Ahmed Iliyasu, must have been killed on Monday May 28, 2018 by his assailants. He said this while parading the suspects alongside 22 others arrested for various offences ranging from armed robbery, cultism to stealing and rape.

They were paraded on Friday, June 22 at the command’s headquarters at Eleweran, Abeokuta.

He had said Adebisi’s elder brother, Adeola, had on June 3, 2018, reported to the police that he(Adebisi) had left home since May 28, 2018 with his girlfriend in his car, Honda Crosstour with number plate FST 350 FA, but had yet to return.

Upon receiving the complaint, the men of the Inspector-General of Police’s Intelligence Response Team together with men of the state police command swung into action.

Through technical intelligence, Muritala and Razak were nabbed and evidence such as Adebisi’s iPhone x and two pairs of sneakers also belonging to him were recovered from them. Iliyasu added that on interrogation, the suspects confessed that they killed Adebisi and his girlfriend.

He said, “They said they lured the victims to a junction at Oru Ijebu, where they were forcefully taken to a nearby bus and they smashed their heads with planks and gun.”

While speaking with journalists, Muritala confirmed that he belonged to Aiye cult group and that he and two other accomplices killed the victims.

He alleged that he and the late Adebisi had a dealing relating to an internet fraud in which over N2m was involved.

He further claimed that Adebisi, despite many calls and entreaties, refused to give him his own share.

He said, “He refused to pick my calls and I stopped calling him. And on May 28, 2018, I got two other guys to join me and we abducted Adebisi and his girlfriend.

“Moreover, since he belonged to Alora cult group, he and members of his group were threatening me, so we later killed him and his girlfriend by using planks.”

When asked why they killed Adebisi’s girlfriend, he replied, “It was just to cover our track.”

However, late Adebisi’s elder brother, father and mother, debunked the allegations made by the assailant that he (Adebisi) was a cult member and an internet fraudster.

Putting up defence for Adebisi, Adeola said his late brother dealt in crypto currencies, especially bitcoin business. He said Adebisi was close to some car dealers and he operated as a middleman between sellers and buyers and he got commission.

He said, “Muritala’s allegations that my younger brother was a cultist and internet frauster(yahoo, yahoo) were all lies.

“I travelled to Awa-Ijebu to see my brother in his hostel behind the police station. I knew him well; he was never a cultist nor a Yahoo boy. He was into crypto currencies, especially bitcoin.

“He equally was making money acting as a middleman between those who wanted to buy cars and car dealers. He got his own commission from such sales.”

In his own defence, Adebisi’s mother, Maria, said she could swear with her life that her late son was not a bad child. She argued that Muritala only murdered his son just out of envy. She explained that she had a one-on-one discussion with Muritala, at Eleweran, shortly after the suspects were paraded.

She said, “Among all my children, he was the most quiet and he could not hurt a fly. He did not keep bad company, much less of joining a secret cult or going into internet fraud.

“When all the journalists had left after Muritala and other suspects had been paraded at Eleweran, I moved closer to him and asked him, ‘Why did you kill my son? His reply was, ‘I killed him because I envied him.’”

Now struggling to fight back tears, she added, “With the murder of my son, Muritala has taken me to a village square and stripped me naked.

“My son loved God, he never missed going to church. He attended the Redeemed Christian Church of God and never missed the monthly Holy Ghost service at the Redemption camp.

“He never smoked nor drank alcohol and quite humble. I knew that he was helping people to buy cars from dealers and he earned commission from such sales.”

On his part, Adebisi’s father also said, “My son was never a cultist nor an internet fraudster. The suspect, Babatunde Muritala, kept going back and forth. He was quoted to have said that my late son used to help him with money but suddenly he stopped and became arrogant and that was why he killed him.”

Julia’s mother, Mrs Olamma Ofor, who wept during the parade of the suspects, was too grief-stricken to talk to journalists. All she could mutter was, “She was my daughter; she was just 18 and they were just wasted like that. Justice must be served in this case.”

Though Adebisi’s remains had been buried in his father’s compound at Ota, his father and mother are equally asking that the killers of their children should face the wrath of the law.

The father said, “All I want from the government is that justice must be served in this case. They had killed my son, they should also suffer the same fate.”

“He killed my son wickedly, he should also pay the supreme price,” added the mother.

“After being side hoe For 6 years, 33 abortions, He finally proposed” – Lady says