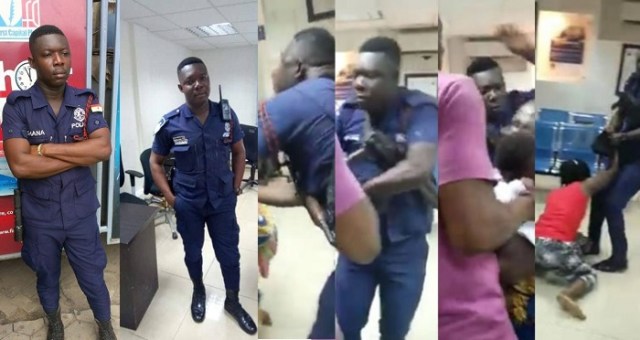 A Ghanaian police officer with the name, Fredrick Amanor, has been captured in a video which is making the rounds online, wrestling with and ruthlessly assaulting a nursing mother in a bank. The yet to be identified lady, had gone to the Midland Savings and Loans to withdraw and had reported a little late after banking hours and was asked to leave. The woman who was clutching to her baby, reportedly pleaded with the bank officials to allow her make some withdrawals.

However, for daring to make such appeal, Frederick Amanor Skalla, was asked to send her out of the banking hall and he did that in Rambo-style.

Starting with an umbrella, the policeman allegedly hit the woman and her baby several times in the head, before he proceeded to slapping and punching her.

The tears of the little child, will not hold back the policeman from continuing with his assault – he pummeled the lady and threw them out of the banking hall.

However an updated report on the incident, alleged that Frederick Amanor Skalla who was arrested over the incident, is currently at the Police Headquarters awaiting possible prosecution for indecent assault.

Man dupes Fiancee of N4.3m after Introduction Ceremony in Edo, goes on to marry another woman