The Ex-Delta Militant leader, is wanted in a case of conspiracy, illegal diversion of the sum of N45.9 billion belonging to the Nigerian Maritime Administration and Safety Agency, NIMASA.

Since December 10th, 2015 Tompolo has been declred wanted for questioning by the Economic and Financial Crimes Commission (EFCC) and had refused to honor their invitation claiming he was in court against the anti-corruption agency.

Specifically, the EFCC wishes to question Tompolo about the illicit sale of N13 billion in land from him to the Federal Government. According to reports, the Federal Government wanted to construct the Nigerian Maritime University (NMU) and had diverted public funds through the Nigerian Maritime Administration and Safety Agency (NIMASA) to the militant.

Mr. Tompolo is reportedly hiding in the Niger Delta creeks; he rejects any insinuation that the land deal was fraudulent asking EFCC to contact former President Goodluck Jonathan for clarification.

Ishola Oyenusi was one of the first notorious armed robbers in Nigeria. He is renown for his ruthlessness with many claiming the gangster even killed people for things as small as a stick of cigarette. He is believed to have gotten into armed robbery in 1959 but the long arm of the law caught up with him and he was executed in 1971.

Oyenusi started off his robbery career by snatching a car (whose owner died in the process) just because his (Oyenusi) girlfriend needed some money. It was said by some people that Oyenusi was romantic. He sold the car at the price of N400 and gave the money to his girlfriend.

Oyenusi came into limelight after the Nigerian civil war ended in 1970. He robbed banks and people in both daylight and night, and he never let any of his victims live to see another day, he killed them all! This earned him the name “Doctor rob and kill“. At the height of his horrific reign, Oyenusi bragged that “the bullet has no power“. 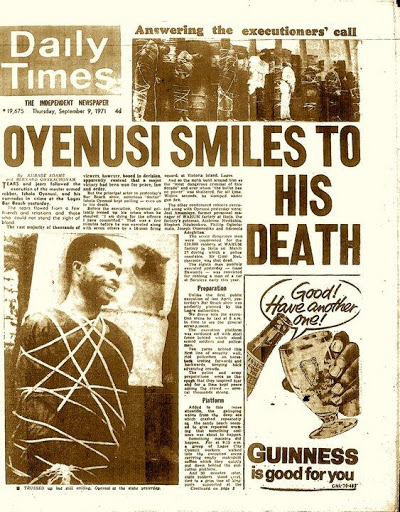 However, nothing lasts forever, and as the adage says, everyday belongs to the thief hile a day belongs to the owner. On the 27th of March, 1971, Oyenusi was nabbed by the police during one of his robbery operations in which he and his notorious gang killed a police constable named Mr. Nwi and stole $28,000 as at then. Cloud of shame hovered above Doctor Ishola Oyenusi as he was casted before the law and found guilty then sentenced to death by firing squad.

when Oyenusi was ushered to the popular Bar Beach in Lagos where he was to be executed, over 30,000 Nigerians were happily and excitedly waiting to see the man who had terrorized them get riddled by hot bullets. It was said that some civil servants even brought a coffin to the execution ground to mock the once mighty robber kingpin who was now nothing but a scapegoat whose breath would be exhausted in any moment.

He also said “I am dying for the offense I have committed“. Oyenusi and other criminals were fastened to the stakes. The soldiers lined in front of them and aimed their ever ready guns. Some of the criminals yelled their last words of protest at the cameras. Then a loud voice let out the word “fire“! Oyenusi and other criminal’s body were sprayed with bullets. That was the bitter end of Ishola Oyenusi who lived by the bullets and died by the bullets. 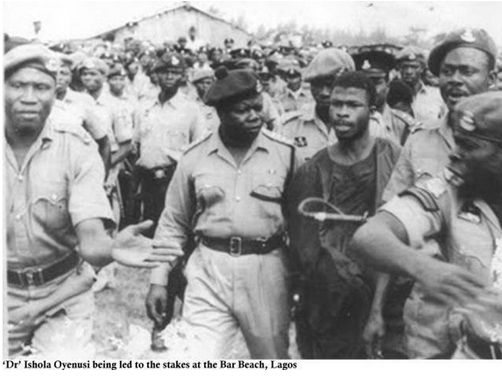 Prev2 of 7Next
Use your ← → (arrow) keys to browse
Tags: countdown postPhotos ]
Share13Tweet8Pin3SendShare