‘Obasanjo wants to use his son for ritual’ -Obasanjo’s ex wife cries out, gives shocking revelations about Olujonwo’s 1-year marriage to Tope Adebutu

Spouse of the former president of Nigeria, Olusegun Obasanjo, Taiwo Obasanjo, has released a statement revealing what led to the crash of her son, Olujonwo’s one-year marriage to billionaire daughter, Tope Adebutu. Mrs. Obasanjo who was against the wedding initially and had even gone to court to stop it, made some shocking allegations of what transpired in her son’s marriage to Tope. She made all the allegations in a statement sent to LIB. Read the statement below… 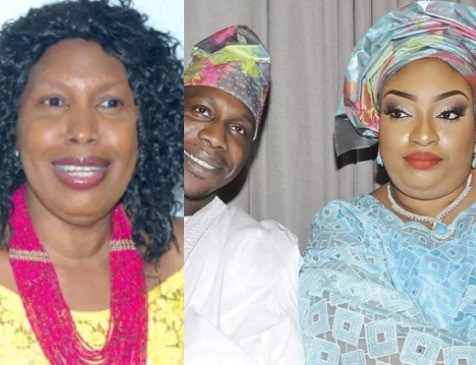 THE CRUEL AND EVIL WIFE OF MY SON AND CHIEF OLUSEGUN OBASANJO:
BY MRS. TAIWO OBASANJO WHATSAPP NUMBER

ON TOPE ADEBUTU: She was introduced to my son by Chief Kenny Martins (my
Twin brother). Long before the marriage, it was prophesied that we should not do
a big wedding for my son before his 34th birthday and the wife coming will come
from a wealthy family but she will cause disaffection, disunity, division and great
problems in the family etc. and the wedding date must not fall on 11th or 13th
and we should not use gray colour during the wedding, as the gray colour
symbolises the death of the glory of Chief Olusegun Obasanjo like a gigantic fire
turning into ashes, they ignored and humiliated me and picked 11th and 13th and
gray colour which the Obasanjo’s family wore to the wedding.I was warned that
both date will open doors to great tragedy within the family and the nation and
the girl will stir up great storm in the family.

ROSEMARY DACOSTA-MOTHER OF TOPE ADEBUTU: I went to her house to
explain to her the need to shift the date based on the warning from the prophecy
received but her response was that we should forget the prophecy and do the
wedding quickly so that they can get big money from Chief Kessington Adebutu.

COURT CASE: when 11th and 13th of May was picked for the wedding, I
pressured Chief Kensington Adebutu and Dr. Biola Olorode (The first daughter of

Chief Kessington Adebutu) and Chief Kenny Martins to change the wedding date
but I was hated, rubbished and called all manner of names, they even said nobody
should listen to me that I am mentally deranged. Rosemary Dacosta and Tope
Adebutu even boasted that the wedding date remains 11th and 13th May 2017,
and that it is final.

I went to court to get them to shift the date to avert future problems, in order to
avert the disaster that was prophesied when I have been seriously warned against
that date. They came to court with 5 powerful Senior Advocate Lawyers to mock
and ridicule me in court that I have turned the wedding to an Ile-ife oracle, Ile-ife
is a town where the No. 1 Royal Monarch of the Yoruba’s comes from. I lost the
suit.

AFTER WEDDING: I started receiving phone calls on three different occasions that
my son has been running away from his matrimonial home because of the violent
and the wild insultive behaviour of Tope Adebutu.

HIDDEN SECRET HAPPENINGS IN THE MARRIAGE: Tope Adebutu on most
occasions would slap my son, abuse and treat him with arrogance and contempt,
when my son realized that Tope Adebutu suffers from emotional insecurity and
mental instability with daily threat from her that she would kill my son and
nothing will happen, my son started locking the door of his bed room and
sometimes running away from the house to save his life. My son is healthier and
stronger than her; I have brought him up never to beat his wife or any woman.

TOPE ADEBUTU AND HER MUMMY’S BEHAVIOUR: After the wedding
introduction Rosemary Dacosta and Tope fought one of Obasanjo’s daughter in
their house. Tope Adebutu would phone my son in Abeokuta to come and she will
seat in the car and give order to my son to get down and buy this, buy that for her
as if my son is her servant. After marriage, every little disagreement she will slap
my son and even slapping him in his car in the presence of my son’s driver

8.MY SON REFUSAL TO HAVE SEX WITH HER: After abusing, insulting, shouting
and slapping my son, she would then order my son to come and “fuck her” and
my son would go into his room and locked up himself and sometime run away
because my son is a normal human being with his senses and dignity intact. How
can any normal man make love to a demonic wife whose utterances and behavior
are boastful of cruelty, destruction and humiliation?

10.RITUAL KILLING AND SACRIFICE: Chief Olusegun Obasanjo is evil, secretly in
demonic agreement with the two women Rosemary Dacosta and Tope, the three
of them wants to kill my son and use him as sacrifice, to fulfil his demonic

agreement to Tope Adebutu that he would ensure the speedy promotion of Tope
Adebutu to become the Chief Judge of Ogun State in the shortest possible
manner. When my son saw that his life was in danger, he ran away from the
Hiltop residence of his Dad- Chief Olusegun Obasanj

11.ON CHIEF OLUSEGUN OBASANJO: Most times my son would report the
humiliating behaviour and utterances of Tope Adebutu to his Dad Chief Olusegun
Obasanjo, instead of admonishing and calling this girl to correct her, he will tell
my son to go and manage her, not for once did Chief Olusegun Obasanjo ever
called her to order.

12A.PATERNAL WICKEDNESS: The oppression, evil domination and disgusting
control of Chief Olusegun Obasanjo on the life of my son makes him to keep
running away to save himself from being killed by his wife and his biological
father. When my son resisted his dad and refused to remain in his marriage, Chief
Olusegun Obasanjo became a raving mad man, he seized my son’s jeep, he
stopped his salary, he threatens that he would disowned my son, cut him off
from his “will”, he will ensure that my son amounts to nothing, that he will not
help him and he will block all avenues of his income and businesses to impoverish
him and make my son suffer untold hardship unless he returns to his marriage to
Tope.

12B. CHIEF OLUSEGUN OBASANJO: He threatened my son and warned him never
to speak to anyone or the public or the press or his mother on what is happening
to him in his marriage. The pain, the attack, the gang up, the desperate and
ungodly bullying of my son by his Dad to make my son submit his dignity, honour
and respect to Tope is unheard of, his desperation goes even to the extent of
forcefully compelling and demanding that my son must come back and start
having sex with his wife or else he would make him suffer more deeply.

13A. CHIEF OLUSEGUN OBASANJO KEPT TOPE ADEBUTU MY SON’S WIFE
SECRETLY IN HIS PENT HOUSE: He kept my son’s wife Tope in his presidential
library where she lived for over three months, near his own Pent house and he
goes to see Tope secretly in the dead of the night. My son caught Tope his wife
there on the 14th of March 2018 when he visited his Dad unannounced and after
witnessing this first hand he ran away again. This is very true and can be verified.

Chief Obasanjo will repeatedly phone my son threatening and shouting like a
fatally wounded lion saying reconcile with your wife Tope “come back and start
sleeping with your wife” I won’t marry another wife for you, I will not marry
another wife for you repeatedly, the question is… why is Chief Olusegun Obasanjo
desperately and forcefully demanding that my son should go back and start
having sex with his wife, knowing that my son is running away from a wife who
has repeatedly served advance warning to my son that “I will kill you and nothing
will happen.

Chief Obasanjo married over fifteen wives and has more than thirty concubines.
When Chief Olusegun Obasanjo was having problem with his own first wife the
Army did not seize his car, did not drive him from his official residence, did not
stop his salary or seize or freeze his bank account or payment of his salary, the
Army did not join forces with his 1st wife or punished him because of his wife or
gang up against him, the Military didn’t pry into his sex life or extramarital life, the
Army didn’t disgrace or retired him with humiliation.

When Nelson Mandela came out of prison, the horror, the humiliation, and the
abuse which was not known to the world but was privately meted out to him by
Winnie at the home front made him to seek divorce from Winnie. Prince Charles
of England also got his divorce from Diana when he couldn’t cope with Diana.

It is very sad and very painful to say this, but Chief Olusegun Obasanjo is
frightfully evil, wicked, sick and sexually immoral demonically, a sadistic
psychopathic father and an unrepentant arrogant tormentor of his children who is
abusing and misusing his paternal power and influence to negatively cow his
children into submission, possessing demonic intelligence,a serial satanic
destroyer of all family values without remorse.

#BBNaija: Laycon discloses the first thing he will do for his mum when he gets…

#BBNaija:What will happen if LAYCON doesn’t win tomorrow? From grass to…

Nina Shows Off Mum After Been Accused Of Bleaching

#BBNaija: Laycon discloses the first thing he will do for…