“My Passionate Kiss With RMD Comes With The Job” – Dakore Akande

Screen dazzler, Dakore Egbuson-Akande, who is happily married to Olumide, son of Ibadan-born billionaire, Chief Harry Akande has revealed her relationship with co-actor, Richard Mofe Damijo and why she still kisses deeply in movies despite her martial status. The Nollywood actress has not stopped explaining herself weeks after video of her and veteran actor RMD deep-kissing surfaced.

Dakore who played the role of a sexy wife of RMD in a new TV series, Castle & Castle, where she was seen deeply romantically involved with him, explained that although she is quite selective with movies scripts, her husband, Olumide gives her the go-ahead to explore. 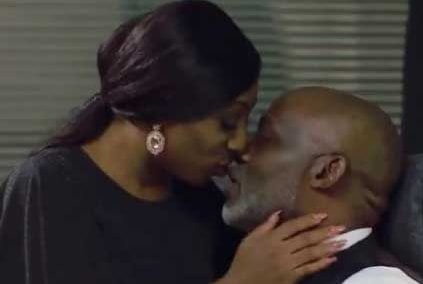 Here is what the busy mother of two told The Entertainer:

“Since the beginning of my career, I have been selective of the kind of people I work with, and the kind of scripts I accept. It’s part of having the spirit of excellence. My passionate kiss with RMD comes with the job. I try as much as I can to steer away from such romantic roles, but I can’t keep steering and find myself totally out.

“However, my husband and I have an understanding. At the end of the day, I’m his wife; he is the one I go home to. He is the one I love. He is the father of my kids. RMD and I also have a connection, we have done such movie before. We both understand duty call.”