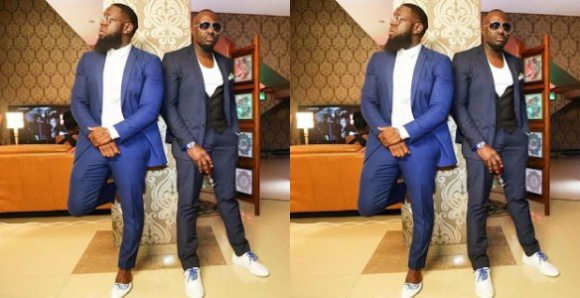 Jim Iyke has revealed that he is going to be the godfather to Timaya’s newborn son after the singer proposed it to him. many see the relationship between Jim Iyke and Timaya as them being unofficially twins in the entertainment industry.

“He’s already proposed it to me so this was my message to Timaya when he welcomed his child. So, I said, “hey, I heard you just had a son, so finally we have an heir – he calls us the alpha male – and he couldn’t have picked a better father for you are an astounding person but truth is somethings still dey shook for your head but don’t worry about it son, we are already working on it.”

“It’s a great joy, Timaya is a brother, it’s just that he can’t keep up with me, he says my head is filled with business and I am always working on something or the other but I try and bring him in the businesses that I can,” he said.

He went to reveal that, he isn’t just close friends with Timaya as they both own a couple of businesses together which a lot of people have no idea about.

“Timaya is probably one of the most gifted and most loyal people you can always want around, a man that calls you up and says hey this deal is on, do you have any loose cash and lets get it done, that is type of person you want in your corner, he’s someone we own two or three gigs together and nobody knows about, the result of that is the bond we share. I mean he’s scheduled back in Nigeria from Russia just to support me at the launch of Oga Work, that is the synergy and I am happy that he has a son and he has proposed that I be the godfather and I’m happy to be. I have said it before, it’s a cloak and dagger industry, so anyone you find that holds your hand and you hold is the brother,” he concluded.

We thought as much as Jim Iyke perfectly fits to become Timaya’s son’s godfather because of their very close relationship. Recall a few days ago, Timaya shared the news about the birth of his son.