Toke Makinwa elated as she wins N7.2 million after placing a bet on France to win the World Cup (Photos) 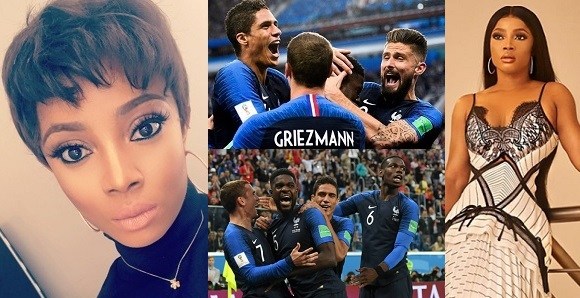 Media Personality, Toke Makinwa is $20,000 (N7.2m) richer after she placed a bet on France to win the 2018 FIFA World Cup. Taking to her Instagram story, Toke celebrated her win, revealed she just copped $20,000. Her close friend and fellow media personality, Gbemi also confirmed it.

Meanwhile, After France’s win, England striker Harry Kane won the Golden Boot at the 2018 World Cup after finishing the tournament with the highest number of goals.

The Tottenham Hotspur talisman scored six times in Russia, two ahead of a five-man chasing pack come the end of Sunday’s final between France and Croatia.

Les Bleus duo Antoine Griezmann and Kylian Mbappe struck in their country’s 4-2 win over the Vatreni, which put both players on four goals apiece.

Three of Kane’s strikes came in the 6-1 win over Panama, two were scored in the 2-1 defeat of Tunisia, and the sole goal outside of the Group G games was a penalty against Colombia.

As FIFA World Cup 2018 ends, Men are now handing over the TV remote to their wives (photos)