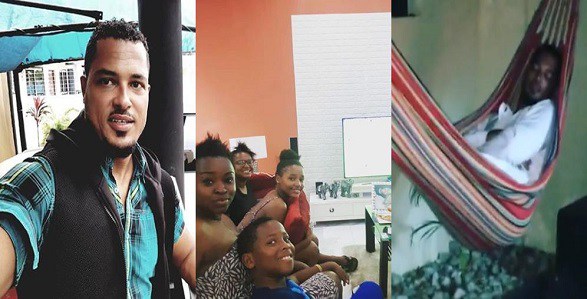 Van Vicker decided to place a bet with his family on who would win the World Cup between France and Croatia. Unfortunately, he was wrong and had to bear the brunt of his actions. According to him the Russia 2018 world cup final match between Croatia and France led to him being kicked out by his family.

The divided in the family began when Van Vicker decided to support Croatia against his wife and kids’ choice to support France. This led to a bet which saw Van Vicker crash outside because he supported the losing side.

”Goooooooooooollll!! Croatia all the way. The 3 France supporters in this picture will sleep outside in the rain tonite. #Russia2018.”

After the game was over, he shared a video showing him sleeping outside.

”I deserve what came to me. I threatened France supporters in my house would sleep outside in the rain tonight. Well France won, guess who is sleeping outside in the hammock? I pray it doesn’t rain tonite. My son joins me soon, lol.”