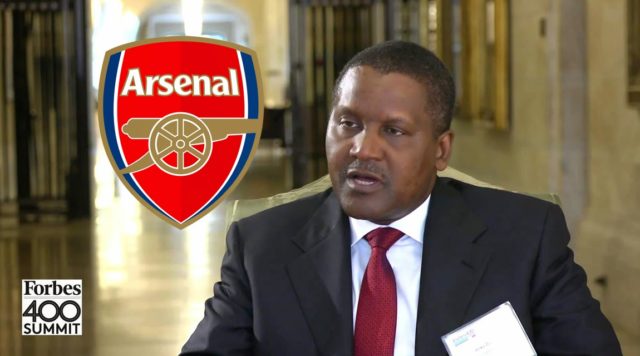 Africa’s richest man Aliko Dangote has again reiterated his desire to take over Arsenal. The Nigerian businessman – who is worth £10.4billion and is currently at number 66 on Forbes Magazine’s list of the most powerful people in 2018 – has long been linked with purchasing the Gunners , and first stated his desire to do so back in 2010.

The following years have brought more and more links with him purchasing a significant stake in the club, and Dangote – who started his first business at the age of 21 and founded Africa’s largest cement provider – says he plans to make a move for the Gunners in two years’ time.

‘We will go after Arsenal from 2020… even if somebody buys, we will still go after it,’ Dangote, 61, told Reuters.

Stan Kroenke remains Arsenal’s majority shareholder with 67.09 per cent of the club, while it was reported on Tuesday that Alisher Usmanov was prepared to sell his 30.4 per cent stake.

When talking about the majority shareholders in August, Dangote said:

“If they get the right offer, I’m sure they would walk away.

“Someone will give them an offer that will make them seriously consider walking away.

“And when we finish the refinery, I think we will be in a position to do that.”

Dangote’s new son-in-law, Jamil Abubakar allegedly impregnates side chic; she cries out, says if anything happens to her or the baby, he’s responsible (Details)