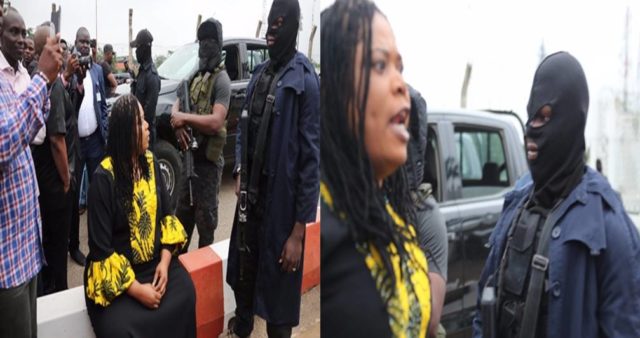 A very angry female lawmaker identified as Hon. Boma Goodhead, who is a member of the Federal House of Representatives, representing Akulga/Asalga constituency in Rivers State, has confronted the masked DSS officials who blocked the entrance of the National Assembly. The lawmaker was captured on camera in a video making the rounds online angrily confronting the armed DSS security operatives telling them that they can not intimidate anyone. Private: Don Jazzy And Tiwa Savage invited by DSS over… Meanwhile, senator Ben Bruce and other colleagues of his are currently at the gate of the Ntaional Assembly where they have been prevented from entering the complex by DSS.

Speaking to Channels TV, Ben Bruce revealed that he has reached out to the US embassy and will also reach out to other European countries so as to revoke the visas of Senator Godswill Akpabio and other leaders that orchestrated this seige.