How Obasanjo Knelt Down For Atiku In 2003 – Wole Soyinka 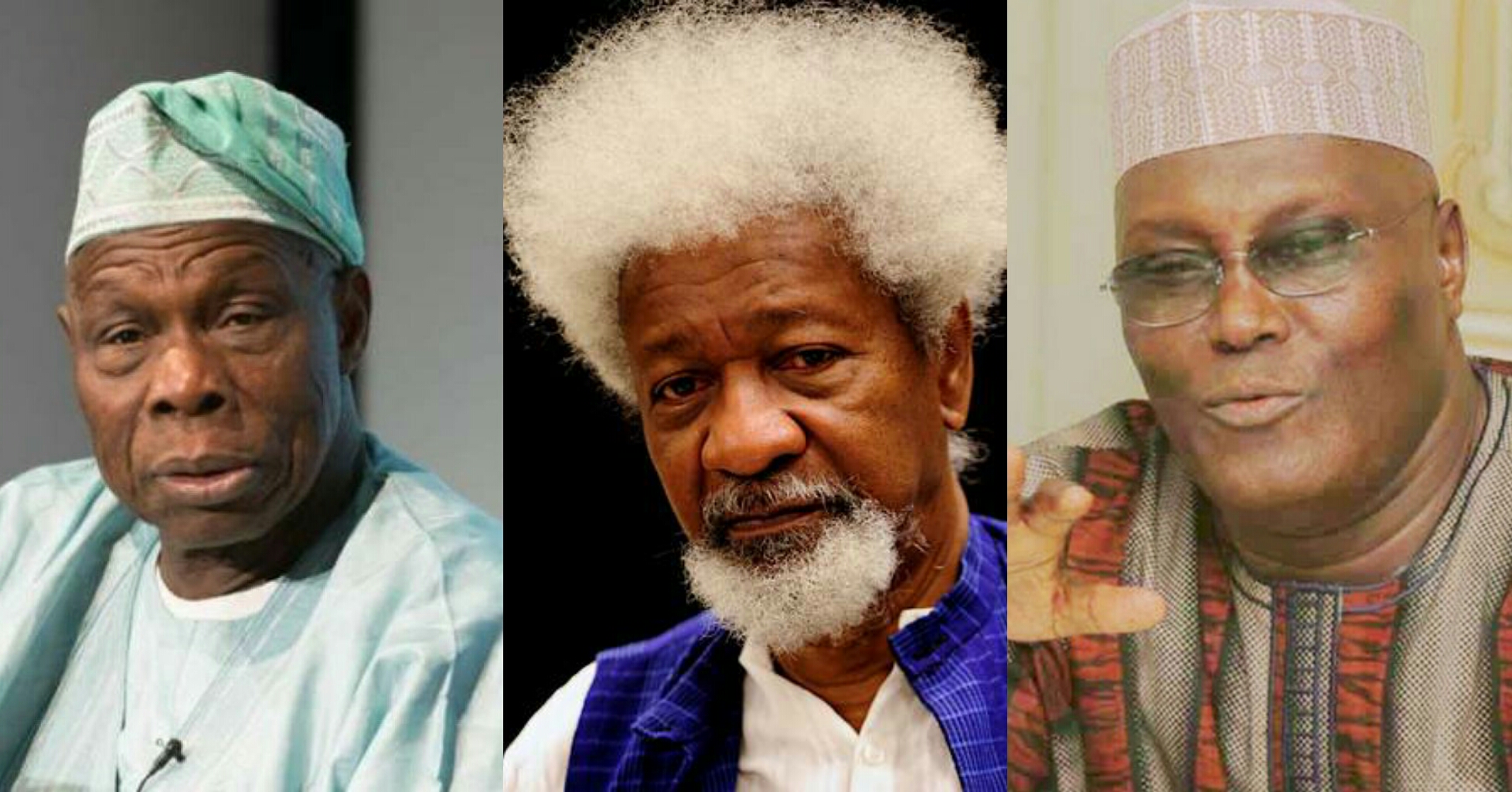 Former President Olusegun Obasanjo knelt down for then Vice President Atiku Abubakar in his desperate bid to secure the ticket of the Peoples Democratic Party (PDP) for the 2003 poll, according to Professor Wole Soyinka. The revelation came yesterday as the Nobel laureate gave a rare insight into the high-stake lobbying and negotiations that preceded the PDP’s presidential primaries in which Atiku was highly favoured to win at the expense of his then boss Obasanjo.

Besides, Soyinka spoke on how genuine efforts by Chief Bola Ige to reposition the energy sector as Power Minister between 1999 and 2000 were sabotaged by Obasanjo.

Soyinka was replying a question at a special reading session to mark the presentation of his latest book, “Quis Custodiet Ipsos Custodes?: Gani’s Unfinished Business”, at the Freedom Park, Lagos.

Speaking at the event, Mr. Louis Odion, one-time Edo State Information Commissioner and The Nation columnist, asked the literary giant whether he believed a sensational claim last year by Ekiti State Governor Ayodele Fayose of witnessing Obasanjo going down on his knees in Tripoli before the late President Muamar Ghaddafi in his desperate bid to secure the Libyan strongman’s support for an extension of his chairmanship of the African Union (AU), since the former Nigerian President has neither denied nor confirmed the account.

Fayose’s account was published by an Abuja-based monthly magazine, The Interview.

Ghaddafi was younger than Obasanjo. Libya is smaller in size and population compared to Nigeria.

Responding, Soyinka said he had no cause to doubt Fayose, given his knowledge of how Obasanjo did the “unthinkable” when his aspiration for a second term in office was similarly threatened in 2003.

Said he: “Before the PDP primaries in January 2003, Obasanjo got everyone he knew could reach me on the surface on the earth including Yemi Ogunbiyi and my son, to get me to help him intercede when it was clear that (Abubakar) Atiku was in a position to take his job. He knew Atiku had a lot of regard for me and calls me ‘Uncle’.”

In the now famous BBC interview few days to PDP’s 2003 primaries, Atiku had declared that he was under tremendous pressure from his supporters to contest the ticket against Obasanjo but was yet to make up his mind in what triggered panic in Obasanjo’s camp.

“The pressure was intense,” the literary giant recounted. “Of course, I could not have knelt before Atiku not to embark on a course of action that would lead to his boss’ disgrace. But I can confirm to you that Obasanjo as President knelt down before Atiku so that he would not lose his job.

“But I warned Atiku that for making Obasanjo to kneel down for you, be sure you would have to pay heavily for that. I guess my warning came to pass if you remember Atiku’s dramatic change of fortune once Obasanjo was sworn in for a second term of office.”

As expected, yesterday’s book reading turned out a day of reminiscences of many bizarre dramas and unsavory episodes that characterised Obasanjo’s reign as two-term president betweeen 1999 and 2007. The panel of disscussants included frontline rights activist-lawyer Femi Falana (SAN) and Mr. Sam Omatseye, author and Chairman of “The Nation” Editorial Board, and was moderated by Mr. Kunle Ajibade, award-winning author and Executive Director of “TheNews/Tempo”.

Dispelling the notion that the long-running disagreement he has with Obasanjo is personal, Soyinka said his motivation is the desire that those he described as cause of the nation’s problems do not continue to recycle themselves as the solution.

He also dismissed Obasanjo as a hypocrite for denying that he did not have a hand in the third term agenda in 2006.

Said the playwright: “I remember I was invited to a conference in Germany around the time the third term game was unfolding in Nigeria. Then, I received this frantic call from officials at the Nigerian embassy who confided in me that they had been told to prepare for Obasanjo’s third term in office. They expressed fears that should it succeed, the country might be plunged into a serious crisis. They were of the view that I could use my leverage to talk to him or help mobilise public opinions to dissuade him.

“At the conference proper, I made sure I continually made poignant innuendos in the direction Obasanjo sat that day. But, typically, he kept shrugging his shoulders and looking the other way.

“But when the opportunity came for a closer interaction at the dinner, I pointedly told him that ‘Obasanjo, you know you cannot try third term’. Suddenly, he charged back at me, saying, ‘Wole, you only have one vote!’ I remember the Nigerian envoy then to Germany, Prof. Tunde Adeniran, jovially remarked that, ‘Ah, Mr. President, Wole Soyinka has more than one vote o. You know when he says anything, people listen across the world.’

“As soon as Obasanjo left the venue, I told Adeniran that ‘with what you’ve just said, be sure you’ve lost your job’. True, soon afterwards, Adeniran lost his job.”

Corroborating Soyinka, Falana said contrary to Obasanjo’s continued denial, the former US Secretary of State Condoleezza Rice alluded in her book to how the former Nigerian leader prevailed on George Bush to support his third term bid. This, Falana said, Obasanjo never refuted.

On the parlous energy situation in the country, Soyinka recalled that Obasanjo did not only frustrate Ige but also humiliated him.

He said: “This was a man who said after Bola Ige died that we put somebody there, Bola Ige who did not know his left from right. He owes Bola Ige for maligning him, after humiliating him after sabotaging his genuine efforts to transform the power sector. It was sabotage and nothing less than a terrorist act against the electricity supply of the country.

“Bola Ige was frustrated and his works sabotaged. In fact, he had done his homework before he took office. He summoned a group of experts and mapped out the transformation of the sector. But, he was sabotaged from the inside. Bola Ige asked Obasanjo to remove one Suleman Bello, who was the managing director of the corporation then. The consequences we are suffering today. Obasanjo collaborated and protected the system headed by Mr. Suleman Bello. I dare Obasanjo to meet me one on one on any podium to debate the power project.”