“Without me you won’t have any hits” – Record label exec blasts Davido, see how the problem started

Earlier today, we published a story about Davido replying a comment on an Instagram page about his Porsche gift to Chioma. CLICK HERE TO READ Many were surprised Davido responded to the comment despite his name wasn’t mentioned by the Instagram user @kingpatrickgb. Turns out they have a history, hence Davido’s need to single out his comment.

According to findings by Misspetitenaija, there is an underlying /impending legal battle between Davido’s DMW label and Patrick’s label, Goldenboy Records over singer, Peruzzi.

It is claimed Patrick who is the CEO of Goldenboy entertainment, signed Peruzzi to his label and the contract expires in 2019. However, Peruzzi went against his contract and gave Davido most of his hit songs in 2017 including the smash hit, FIA.

It is also revealed Perruzi is not officially signed to DMW as it was just hype.

Patrick also took to his Instagram story to warn Davido and Peruzzi ,saying they should do the right thing. He also insinuates the Porsche Davido bought Chioma was all for hype. 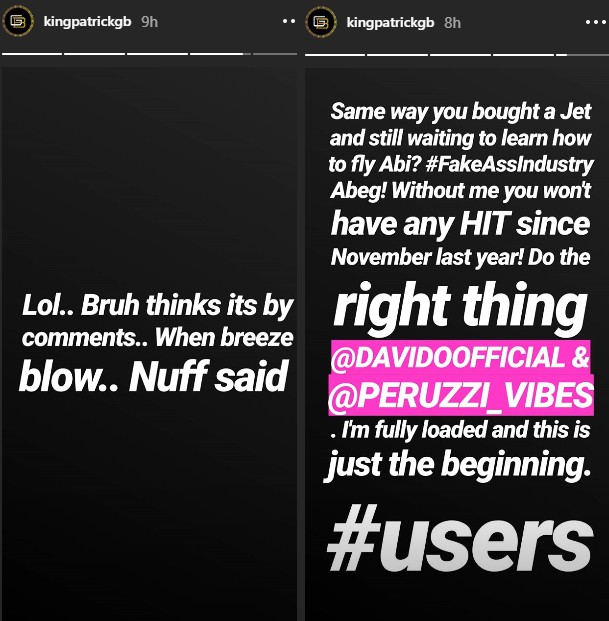