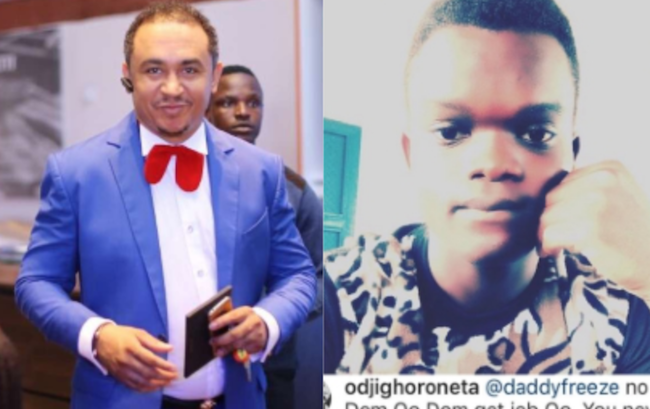 Freeze isn’t having it with Instagram trolls anymore as he has taken it upon himself to give them a piece of him each time they come out at them. Yesterday, after Freeze responded to Adeboye’s son’s post, where Leke said anyone who voted for APC in Osun State is a fool, an Instagram follower of his bashed him for condemning the pastor’s son.

Here is what Freeze wrote to Leke which got him attacked by the Instagram user:

“Leke, for the sake of your father’s reputation, please stay out of this.
–
“Our VP is an APC member and a pastor in your father’s company, a call to him would have done more good than all this public fanfare.
–
“Didn’t your dad just anoint an APC senator as an assistant pastor? Don’t you know the way to their house?
–
“Your dad was also seen hanging out with our APC presido in the UK, who in turn sent him a public shout out on his birthday. Couldn’t you have just gone to ur daddy to tell him to talk to his guys instead of all this?”

A young man who didn’t like what Freeze wrote about Adeboye’s son, sent Freeze a DM, insulting him that the people who he is abusing, clergymen, have jobs and that he, Freeze, has been out of a job for two years now.

”Isn’t this an inbred ninnyhammer? Doesn’t the poor dipstick look like the deformed offspring of a hammerhead shark and a Sumatran rhino??
–
“If only he spent the time he spent on useless blogs studying the Bible, he won’t sound so utterly retarded.
–
“These dumb blogs desperately need your clicks to survive, how can you ever have information if you live off their pages?
–
“Who said I haven’t worked for 2 years? I said I have not MCed for 2 years. MCing was one of the several streams of income I had before the prosperity cabal attacked me and tried to get me sacked, but I was saved by an atheist.
–
“How ironic, a pastor that I used to pay tithe to tried to sack me but failed, because an atheist won’t let him.?
–
“Do you really expect me not to get angry at the moronic idiocy our faith has become?”