Nigerian music star, Davido who was spotted in the studio with Wande Coal a while ago, bought the newly released iPhone XS for members of his team. Davido took to his Insta-story to share photos of the iPhone XS he bought for his team members. Here is the photo below; 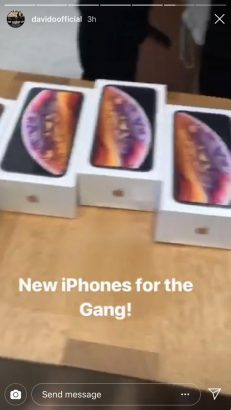 Few months ago, Davido was also in the news after he bought the iPhone X for his DMW crew. He popped a bottle of wine in Lebanon where he turned up for a show, and then displayed the phones on the table for them to take.

THE iPhone XS is the latest smartphone to come from Cupertino with Apple featuring some decent updates including an improved camera, more power and extra storage. This new device sits somewhere between the two with it offering top-end specs but with a smaller screen than both the 6.5-inch XS Max and 6.1-inch XR.

With an almost identical design to last year’s iPhone X, you get a huge huge 5.8-inch display in a device that’s physically smaller than the 5.5-inch iPhone 8 Plus. This beautiful OLED screen stretches across almost the entire front of the device with only the small notch at the top breaking the seamless flow.

READ ALSO!
Man apologizes to Teddy A and Bambam after calling them bastards over toilet sex

Apple’s Super Retina display is bright, crisp and clear. Content punches through the screen with ultimate clarity and things are made even better as you can now watch shows and movies in Dolby Vision and HDR10.

This new smartphone is crafted from all the very best materials with Apple boasting that it’s their most durable to date. Considering it’s covered from head to toe in glass that news will come as a huge relief to many.

To help make the XS even more durable, Apple has also made it far better at dealing with water and this smartphone can now survive in up to two metres of the wet stuff for 30 minutes. Coffee, tea and even beer spills should also leave the XS without a blemish.