Exposed: A town in Cross River where girls are sold for N3500 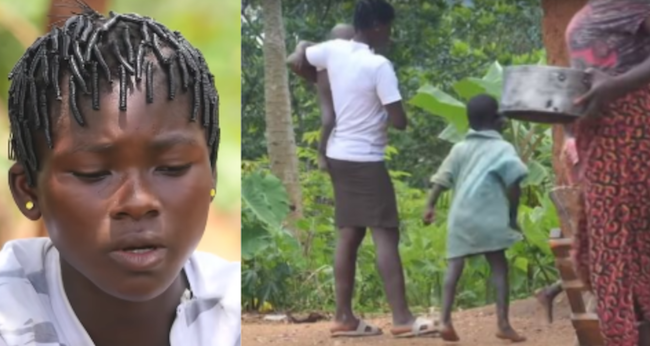 I bet, just like myself, you thought slave trade had completely been eradicated from Africa, right? Well, you guessed wrong as a new documentary just proved how wrong we all were.

People from Cross River as stereotypically known as “loose people” but this new documentary by BBC is now discrediting this handed-down belief and showing the reverse.

In Becheve tribe, in  Obanliku LGA, Cross River, parents are appreciative of their daughters (money woman) because they are propelled by the belief that they will be used to settle off debts. With some of these girls as young as six, some are used to play bets, settle hospital bills while others are given off for as little as N3500.

Here, a 10-year-old girl is considered as ripe for marriage and is taught to cook and clean.

The age-long practice imposes that a woman has the roles of having children and bringing money into the home. She is allowed to bring in the man (her customer) to her home and can have sex with him as long as it is not done on the matrimonial bed.

For some, they are borrowed to a lender until he gets his money. During that period, he can do to her as he pleases including getting her to give birth to him.  It is only on the condition that the parents are able to pay the incurring interests on the girl is she returned. When she is sold, her father does not share the proceeds he gets from the transaction.

Once married, she is prevented from going to school and is given leftovers meals and is treated as a property. It is a social status determiner because only the rich can afford to have as many as they want. Despite the existence of the Nigerian and cross river law against the practice, it is still adhered to.

At present, missionaries who are in the area are working towards ensuring that this practice is put to an end.

Watch the documentary below:

What men do that turns me off – Juliet Ibrahim