There is so much poverty in Nigeria under APC government – Saraki 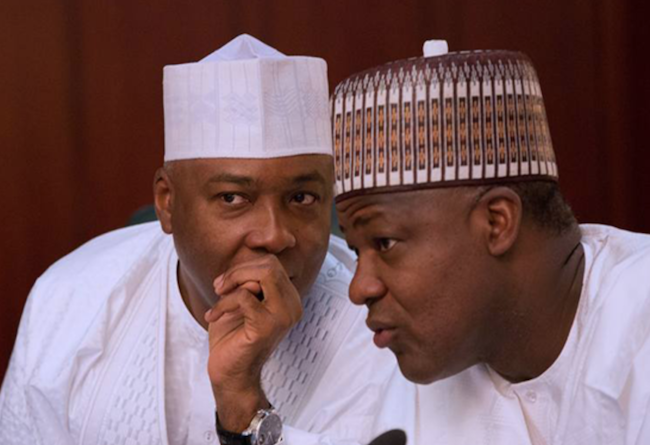 Nigeria’s Senate president, Bukola Saraki, speaking to newsmen, said that he is dissatisfied with the current APC government. According to him, the administration has brought so much pain, suffering and poverty to the average Nigerian.

The declaration was made by the Senate President, Bukola Saraki, who is a presidential aspirant under the platform of the main opposition People’s Democratic Party (PDP), while in Bauchi at the weekend at the party’s secretariat, to seek for votes from delegates to the party’s forthcoming presidential primary election.
Bukola Saraki said that “Nigerians will decide who will make their lives better in 2019. Things have not improved as expected” assuring that if voted as the PDP presidential candidate in the 2019 presidential election, he would not disappoint them by winning the presidential election.
According to him, “a PDP-led Federal Government under my leadership will bring succour to Nigerians and make the country better once again. PDP and I would bring a solution to Nigeria. I will provide an alternative solution to Nigeria and make the country better again”.
He explained that he had no personal issues with President Muhammadu Buhari but the issue is about the presidential seat and what he can do for Nigerians because according to him, “I will make my case to Nigerians and they would decide who has a better chance to make their lives better.”
The Senate President, therefore, urged the delegates to vote for him for him to emerge the party’s candidate, saying that Nigeria needs a young man to take her to the next level.
“Please, vote me in come October during the primaries election. By God’s grace, I will not disappoint you. We need a young man with a vision to take Nigeria to the next level,” he told the delegates.
In his remarks, the PDP Chairman in Bauchi State, Alhaji Hamza Koshe Akuyam, thanked the Senate President for his role in returning Speaker of the House of Representatives, Yakubu Dogara and two other Bauchi Senators back to the fold of the PDP.
This, development according to Koshe Akuyam, has made the party proud in state and commended Bukola Saraki for his courage during his trial at the Code of Conduct Tribunal, saying that, “finally God has vindicated you and cleared you from shame. They tried to tarnish your image at the court but God said no and that is the beginning of your victory in 2019.”
Also in his speech, former FCT Minister and one of the gubernatorial aspirants in the state, Senator Bala Mohammed, told Bukola Saraki that his late father assisted many people in Bauchi during his days.
Bala Mohammed assured Bukola Saraki that because of his father’s magnanimity to the Bauchi people, the people will not fail him but support him in all ramifications.
In a related development, another PDP presidential aspirant, Dr Attahiru Dalhatu Bafarawa, has declared that he has not seen a government under which Nigerians are suffering so much like the ruling APC administration.
Attahiru Bafarawa, a former Sokoto State Governor, stated this while also in Bauchi at the weekend to solicit PDP delegates’ votes in the party’s presidential primary election.
Attahiru Bafarawa, who disclosed that he has been in politics since the 1990s, further stated that Nigerians are not only suffering but being deceived by the ruling APC government.
The presidential aspirant wondered what the APC government was doing in ending insurgency in the North-East, adding that, “APC attacked PDP of being responsible for Boko Haram attacks in the North-East, has the Boko Haram stopped attacking up till now?.”
He called on Nigerians to vote for the PDP in next year’s general elections at all levels because of God so that they would have better democracy just as he called on the delegates to vote for the right candidate, submitting that, “if we vote for the right candidate, PDP will defeat President Muhammadu Buhari.
Courtesy: Tribune
Share
RELATED STORIES