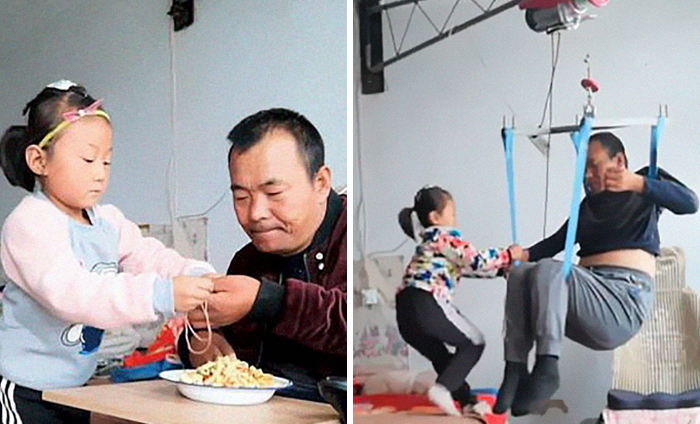 When tragedy strikes, family members need to stick together. But after Tian Haicheng from China got paralyzed in a car accident, his wife of 7 years abandoned him. Luckily, not everyone turned from him. According to Chinese media, Tian was left paralyzed from the chest down after a taxi he took crashed into a ditch in March 2016. His wife left just to months later, taking their eldest on with her. “She told me on the day that she was going to stay in her mother’s home for a few days. But she never returned, and she took our son with her,” Tian said. Only his daugther, Jia Jia, stayed with him. And she’s been taking complete care of him ever since.

Jia Jia gets up at every day at 6am and massages her father’s muscles for half an hour. Before she goes to school, the little girl also brushes his teeth, and washes his face.

While she’s out studying, her elderly grandparents, both farmers, look after her father. After she comes back, Jia Jia feeds Tian his dinner and helps him move around the house using a DIY mobility device.

Jia Jia even shaves her father’s beard. “At the beginning, I didn’t know how to shave and I cut dad’s face and it bled,” she said. “But dad said it wasn’t painful. Now, I’m very good at shaving his beard. My grandmother says I shave it very clean.”

When asked about her mother, Jia Jia said she doesn’t miss her at all, because “she doesn’t look after dad.” She misses her brother, though. “I used to be very close to him.”

To document his daughter’s selfless work, Tian has set up an account on China’s live-streaming app Kuaishou. As of this article, as many as 480,000 people are following their daily struggles.

DNA TESTING!! 6 black celebrities who traced their roots to… He was paralyzed in a car accident in 2016, and she helps him move around the house using a DIY mobility device