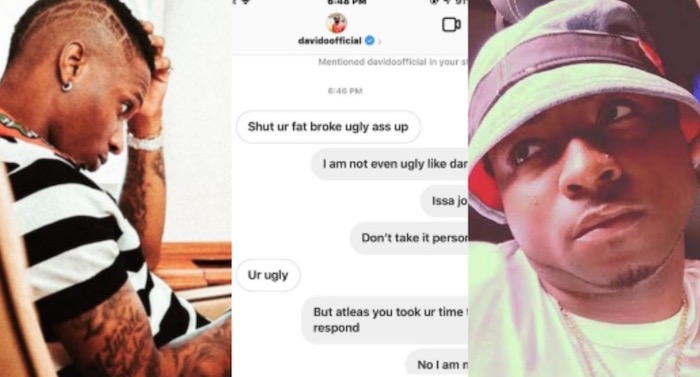 Davido apologises to girl he slid into her DM to insult

OBO, Davido realising his mistake after being called out by a girl he insulted by sliding into her DM and venting, has taken to Social Media to somewhat apologise by asking her for her account number so he could pay her school fees.

The 30 Billion Gang member, who had been called out my differnt media and fans, did this almost immediately she psted a screenshot of their conversation in DM.

In case you missed it, here’s what happened that prompted Davido asking for her account number;

After Cardi B posted a video of a girl rapping, Davido took to the post and responded with a “fire emoji” and Abisade replied;

“That is what you get when you write your own songs”

Have you read: You are a pretentious, uncultured, arrogant, irritating Hippo – Female fan blasts Davido for offering money

Her comment which is somewhat related to what Wizkid allegedly used to bash Davido and his crew members two days ago after they attacked him and Tiwa, obviously infuriated OBO, which made him react instantly, through her DM of course.

After Davido probably noticed her comment had garnered more hate words towards his way, he took to her DM and bashed her with words we really couldn’t believe he would use.

Here are screenshots of the Davido’s reaction and her note

Did you miss: It is your father you will pay to write new songs for you now – Wizkid insults Davido as fresh beef over Tiwa starts

To atone for his mistake, Davido wrote;

“I’ll pay, make I unblock so you can send your AZA, just school not gym”