Davido’s girlfriend, Chioma Avril Rowland says she’ll soon expose people begging for money in her DMs and trolling her on blogs. The Superstar’s girlfriend, who is also a chef, has become so popular that it has certainly given her a fair share of social media trolls and people bullying her online. According to her, many of them also come to her in private to beg her for favours.

Describing them as ‘weirdos’, Chioma said, ‘I’d start exposing people shortly. Imagine begging in my DM and trolling me on blogs’.  Amidst the cheating speculations that hit her relationship with Davido last week, Chioma who had been silent since the news broke that, debunked the rumours that they had broken up.

Have you read: Davido and Chioma go on romantic date amidst breakup rumours 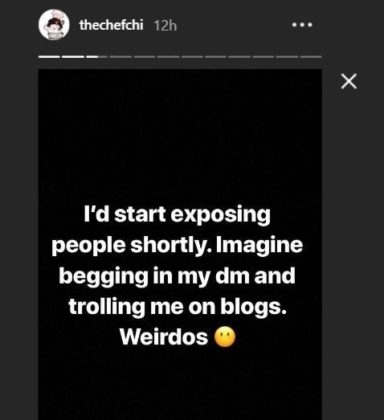