Don’t start with me, I can pay your salary for a full year – Ifu Ennada blasts DeeOne, BBnaija

Yesternight, Ifu Ennada and DeeOne got into a heated argument, which saw both of them cuss at themselves. The reality TV stars took to Instagram to wash their dirty linen after DeeOne posted a video of him in a hotel room, about to headline a show in Jos.

With what started as a joke, DeeOne pretty much escalated it after he subtly accused Ifu of having “Sugar Daddies” who pay her bills.

Did you miss: You this girl that waits for “Sugar Daddy”, I’m not like you, I work for my money – DeeOne blasts Ifu Ennada

Ifu, who was left astonished to DeeOne’s accusations, subtly, yet bashingly told DeeOne off. She said; she could pay Dee’s salary for a full year. 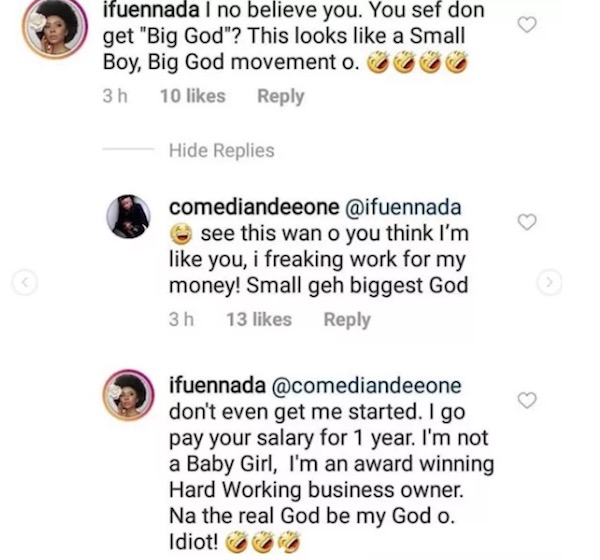 Ifu Ennada donates to Ernest Asuzu down with stroke, urges others to do the same (Video)