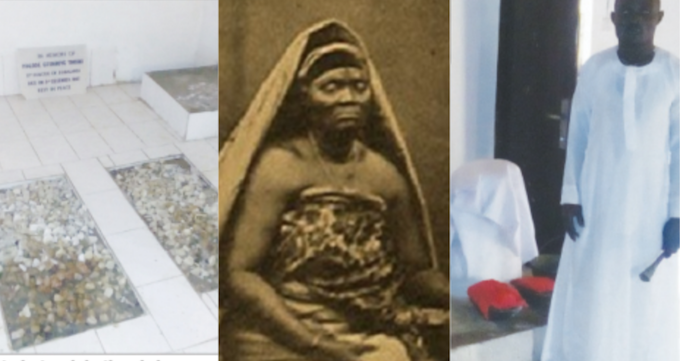 I hope you love history and I hope you’ve heard of Efunroye Tinubu (Iyalode)? I guess you have! This insightful piece by Laide Raheem – Sunnewsonline,  will leave you shell shocked. Highlighting the lifetime of this very power and unarguably the most feared woman in the history of Nigeria.

A tour of the inner chamber of the shrine emblazoned with white paint revealed that five deities were domesticated inside it.

While learning Social Studies in primary school, we were thought that Iyalode Efunroye Tinubu, was one of the heroines who contributed to the growth, peace and well-being of the society. Though a wealthy trader and owner of retinue of slaves, the first Iyalode of Egba, Abeokuta, Ogun State, played a pivotal role in the emancipation of the Egba from the belligerent King Gezo of Dahomey.

Tinubu was born in the Ojokodo forest area of Egba. Her father’s name was Olumosa. She was said to hail from Gbagura and Owu sections of Egba. Tinubu was reportedly married multiple times. Her first marriage was to an Owu man. It bore two sons. After her Owu husband died, she remarried the exiled Oba Adele Ajosun in 1833 who, while visiting Abeokuta, was charmed by Tinubu. She moved with the exiled Oba to Badagry, which was traditionally the place of refuge for Lagos monarchs. At Badagry, she exploited Adele’s connections to build a formidable business trading in tobacco, salt and slaves.

The exiled Oba Adele was still in Badagry when his successor, Oba Idewu, died. Prince Kosoko, Idewu Ojulari’s brother, was a major contender for the now vacant throne. Eletu Odibo, the chief kingmaker, thwarted Kosoko’s aspiration and Adele was invited to become Oba again. Tinubu accompanied Adele to Lagos, but the Oba died two years later. After Adele’s death in 1837, Tinubu supported Oluwole (her stepson) for the obaship of Lagos over Kosoko’s.

During Oluwole’s reign, Tinubu remarried one Yesufu Bada, alias Obadina, who was Oluwole’s war captain. With the support of Oluwole, Tinubu and Yesufu’s trading activities in Egba grew.

When Oluwole died in 1841, Tinubu supported Akitoye (her brother-in-law) for the Obaship over Kosoko’s. After Akitoye emerged Oba, he granted Tinubu favorable commercial concessions.