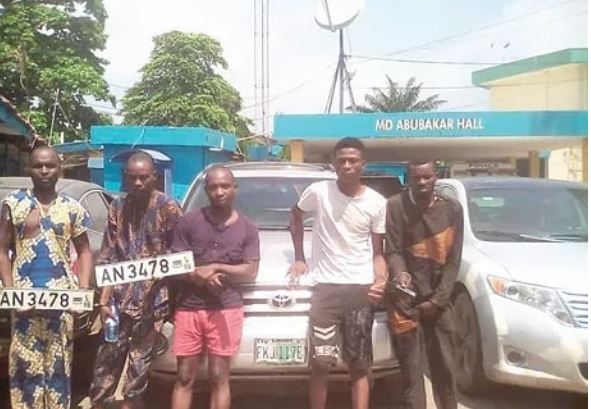 Dreaded armed robbers who snatch vehicles in Nigeria and smuggle them to neighboring county, Benin Republic for sale have been arrested by the Lagos state Police command. One of the suspects named John Godwin while confessing said the only reason why he was caught was because he forgot to read the bible, that if he had done so, he wouldn’t have been caught.

“I was once sent to Ibara Prison in Abeokuta for stealing something at a market in Abeokuta. It was in the prison that I came across Tosin. It was also Alhaji who sent my phone number to Solomon.

“My plan was not to go back to crime when I came back from prison.

I did not have money to take care of myself that was why I went back.

But later I told myself robbery is not best option for me because my parents told me when I was born a pastor prophesied that I would become a pastor.

Fortunately, when I was in the prison I used to preach and pray with my colleagues. It is the devil that drove me to crime. .
“Whenever we are going on operation, I usually read Psalms 121.

I believe reading the Psalms would give me protection throughout the operation period.

On the fateful day I was arrested I forgot to read the Psalms before leaving home. I believe God wanted the police to arrest me so as to quit robbery.

She added that they will charged to court, on completion of investigation.