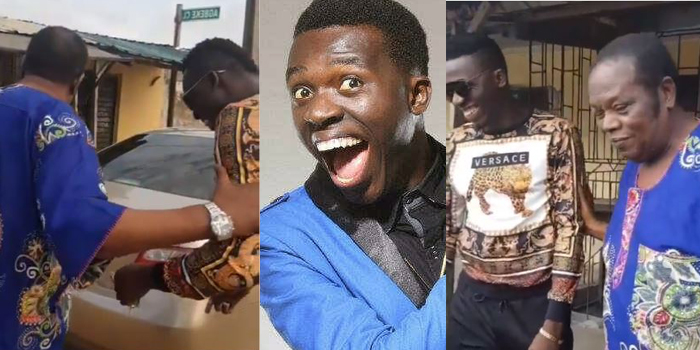 Popular Nigerian comedian Akpororo, surprised Mr. Oluwole his friend’s father recently with a car gift on a visit to their house. Comedian Akpororo said Mr Oluwole took him in after his friend, the man’s son introduced them.

Mr. Oluwole who was taken by surprise with a car gift had reportedly played a father’s role to the prince of comedy many years before he became a successful comedian.

Akpororo’s father’s friend who let him stay in their house and treated him like his own son. claimed he stayed with them for years prior to his stardom.

Akpororo deemed it fit to pay him for his kindness, bought him a brand new car.

The man was obviously surprised and overcome with emotion that he asked Akpororo to kneel down as he said a heartfelt prayer for him.

Akpororo shared a video of him gifting the man the car on Instagram.

He captioned the video with these words:

“He’s complaining about TV set but he didn’t know God has a bigger plan for him, he thought I bought the car for myself but little did he know that the car belongs to him.

“Special introduction #roronation that’s MR OLUWOLE he accepted me with love into his house many years ago when his son (Gbenga) brought me to him and I stayed with them for years, thanks for being a FATHER and for believing in me, thanks for allowing God to use you in my life.

The comedian who is moved by goodness had just recently bought a car for his mother. He took to his Instagram page to celebrate it too.