Runs girl, I know you took this n*ked pic of you in your Sugar Daddy Senator’s room – Chika Ike under attack 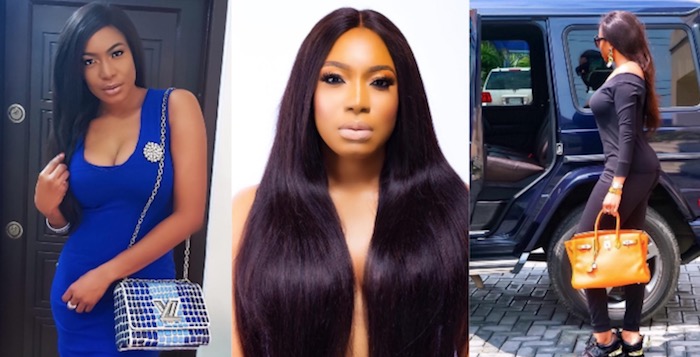 Hours back, Nollywood actress, Chika Ike, took to her Social Media page to share a somewhat sultry picture of her which left many fans drooling. The picture shows her completely topless but her  breasts covered with her flowing hair. A lot of fans took to the post and commented on it, saying she looks elegant, and of course, sexy but some others (mostly the females) condemned her act.

Some said that they expected better from her and she should not have joined the likes of Toke Makinwa in doing something as ‘uncultured’ as this.

While others blasted her saying she should have at least celebrated her birthday with the less-privileged, a fan/non-fan of hers came out hard on the star actress. The fan claims that Chika Ike took the photo in her sugar-daddy’s hotel room.

Over the years, many actresses have been called out by fans over their luxurious style of living and at so many times, being questioned how they get to go on trips around the world and spend so much, living lavishly. The likes of Mercy Aigbe, Chizzy, Mimi Orjiekwe and a host of many others have been dragged out in 2018 by fans who feel they live above their earnings so they obviously have sugar daddies pumping blood and money into them.

You don read: Chika Ike dishes out her topless photo to fans to celebrate her 33rd birthday

Well, Chika Ike just got a bit of the heat as she was dragged by a fan after she shared a topless picture of herself to celebrate her 33rd birthday, today. According to her, she knows the star actress just left the bed of a senator.

“Runs girl, I’m sure you took this naked picture of you in your sugar daddy’s room the senator on your matter all you actresses that will be jumping into one Alhaji’s bed to another just to live flashy lives SMH‘

What is your say on this?