Rita Dominic has reacted after her private phone number was leaked by an Instagram hacker with the name, Yusuf.

Recall, Nina was a victim of an Instagram hack, where her account was compromised and taken over by an hacker who gave his identity as Yusuf. The hacker shared personal messages from Nina’s DM, messages that includes Alex, Bobrisky, Toyin Lawani, and even Rita Dominic.

Rita’s number was released yesterday by the said hacker via Nina’s page, and the whole of social media could not keep calm.

According to Yusuf, he had wanted to get through to the actress but it was all to no avail and so, this is his way of getting back at her.

In the screenshot of the chat, it’s apparent that there was an issue that had to be addressed and so Rita gave Nina her mobile number to reach her better.

Yusuf, sharing the screenshot, wrote, “See @ritadominic I use to messaged since i was a small boy to put me into acting kikikiki i will finished you with call today, nigerians called her till she switched off her phone. Tat is her number there.
Very stewpid girl. She will change number today today.”

The  hacker really wreaked some havoc since he forcefully gained access into Nina’s account. He has released Actress Rita Dominic’s phone number.

Reacting to the supposed leak, Rita has declared she has received thousands of messages, and she now belongs to over 1000 groups on Whatsapp. 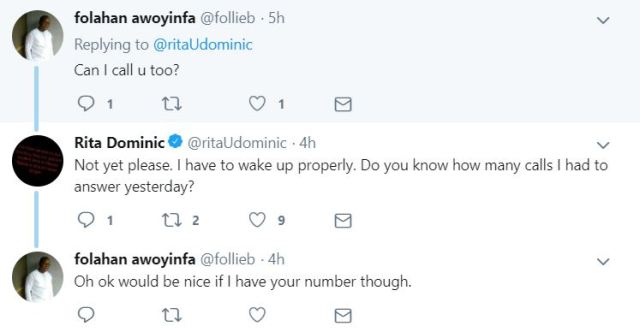 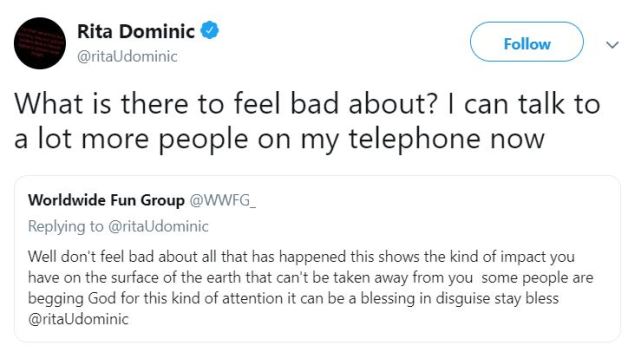