Etinosa Idemudia has accused her ex-husband of rape on their first date, as she lamented over a fresh threat from the Naval officer which was captured in the comment section of her post.

We reported earlier that the Nollywood actress who took to her Instagram page to spill a lot of secrets on the man, revealed that he not only abused her while they were married, but his mother. According to her, her ex-husband’s mother claimed that her son was cursed.

In a new post on Instagram, Etinosa who accused her ex-husband of rape on first date, stated that she is no longer afraid of the bully who she married after the rape incident. She wrote;

Now he sends his friend Lt Adedamola Adeleke.
FEAR is your strongest weapon. I am no longer afraid.
FEAR and Victim SHAMING are an abusers strongest weapons. I have no shame anymore. For someone that has been locked out of the house wearing nothing but her underwear in the middle of the night. No Dami, No I don’t have shame. No shame, No childhood, No FEAR you guys took that all away from me.

Should I talk about why I made that video about rape last year??? Because what I said ladies should do was exactly what I did. I closed my eyes and told myself I wanted it. When I made that video I was battling with memories and I used the only coping mechanism I know COMEDY. But Nigerians did not know. I could not come out and say it was my experience because how would I explain to Nigerians that I married a man who raped me on the first date. SHAME and FEAR. DAMMI LEAVE ME ALONE. YOU CAN’T BULLY ME ANYMORE 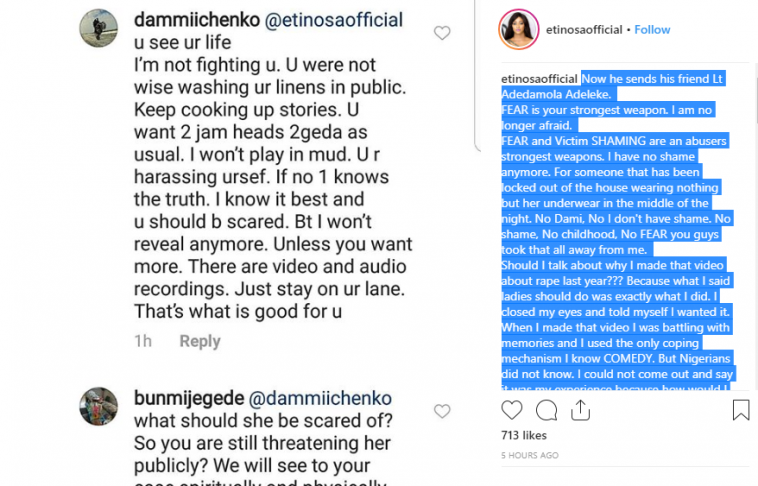