A Nigerian student named Wale Adigun has reportedly killed himself and his major reason for taking his life was because his Project Supervisor accused him of plagiarism in his undergraduate dissertation. 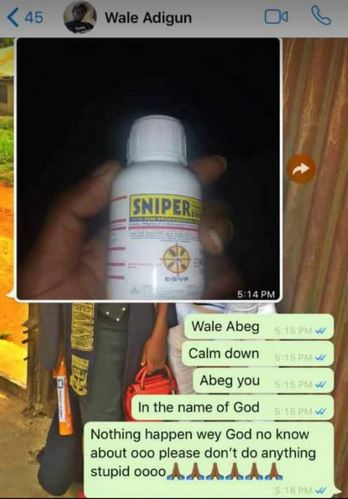 The young man in a chat with his friend before taking 50 pills of Sedatives and Analgesic made it known that he was tired of failing and he wants to rest.

His friend, Olanrewaju made it known on Social media that he eventually lost his life. 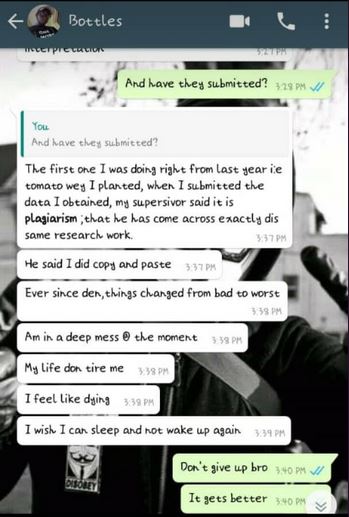 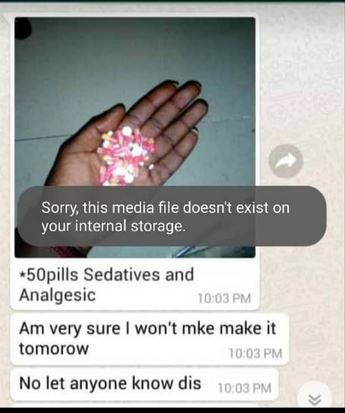 The rate at which young people kill themselves in the country is getting quite alarming. This is coming few weeks after a female Twitter user, Ibukunoluwa82, who had been tweeting suicidal posts after going through severe depression, is dead. Her death was confirmed by her cousin through her Twitter page. Though the cause of death is yet to be known, people believe she committed suicide as she always posted about it every now and then.

Ibukun, who had put up a lot of depressing tweets and death threats was reportedly going for psychiatric evaluation after her school had suspended her indefinitely for hitting a male student on his head with a chair after he assaulted her by pulling her bra at the back and releasing it till it snapped her on her her back on October 13th, #NoBraDay.

#NoBraDay: is an annual  observance on October 13 on which women are encouraged to forgo wearing a bra as a means to encourage breast cancer awareness.