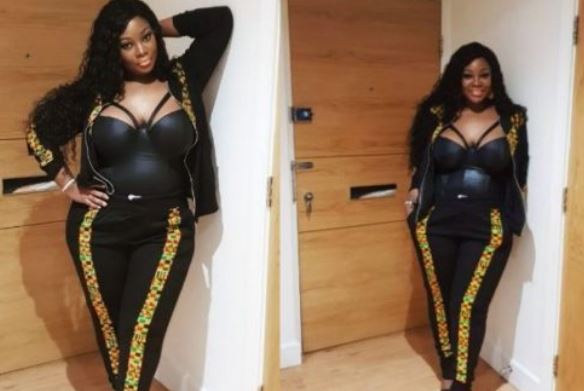 OAP Toolz has shown that nothing can hold her down despite welcoming a baby few weeks ago. The curvy OAP who stepped out for Davido’s 02 Arena concert in London shared pictures showing the outfit she wore to the event and we can stop gushing about it.

Rocking a tracksuit with African print, OAP Toolz decided to unzip the jacket to show off what she had underneath.

Unzipping the jacket revealed her cleavage which doesn’t look like what has been touched by a kid. Pictures below.

OAP Toolz is married to airplane pilot Tunde Demuren. She works at the Beat 99.9 FM in Lagos.

According to the caption which accompanied the pictures she shared from Davido’s concert, the outing was her first in months. Perhaps she was kept indoors due to her pregnancy.