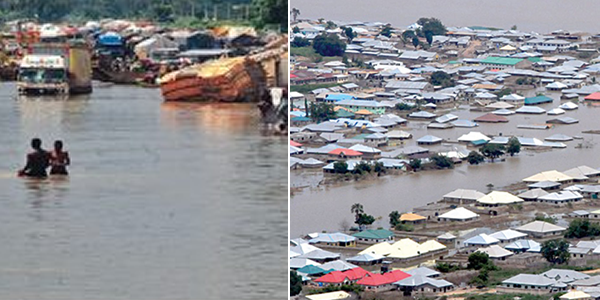 Over 5, 000 families in Ibaji Local Government Area of Kogi State have been displaced by the flood. It also destroyed property running into millions.

Mostly affected are communities close to the River Niger and Analo River, which overflowed their banks, submerging residential buildings, schools and farmlands.

The residents were forced to vacate their homes, to seek refuge on higher grounds not affected by flood. Some of those affected raised wooden platforms above the water level to serve as their beds.

Chairman of Ibaji LGA Caretaker Committee, Mr. William Iko-Ojo, who led some officials of the council on an inspection tour of some of the affected areas, on Tuesday, lamented the plight of those displaced.

He noted that residents of the affected areas are faced with severe hardship, with many forced to reside in makeshift structures.

“The situation calls for urgent intervention because Ibaji is totally submerged. From Onyedega, the council headquarters, up to Ujeh, down to the boundary, no structure is spared and unless the government comes to the rescue of the affected people the situation might degenerate into a major calamity.

“The local government is working hard to create Internally Displaced Persons (IDP) camps, to resettle those rendered homeless, but their immediate need is food. The situation is so bad now, even the palace of the traditional ruler of Ibaji, Chief John Egwemi has been submerged.”

He appealed to the federal and state governments and donor agencies to come to the aid of the flood victims.

Eyewitness accounts had it that farm produce was washed away by the flood, while the major road leading to the council headquarters from Idah, is cut off at different points.

Travelers engaged in speed boat as an alternative mode of transportation.

One of those affected, Mrs Agnes Apeh, a native of Onyedega, bemoaned the situation, saying,

“many of us have lost our homes and belongings as the flood that ravaged our homes at night after a heavy downpour took us by surprise.

“We could not recover anything as everybody was running to safer places with their children. We are now sleeping on bare floor since we have no mattresses.

“It is so disturbing that we have continued to suffer on account of flooding every year, without a permanent solution. We lack everything in Ibaji. It is the only council area in Nigeria without electricity, asphalted road, functional hospital nor good schools, as if we are not part of Nigeria.”